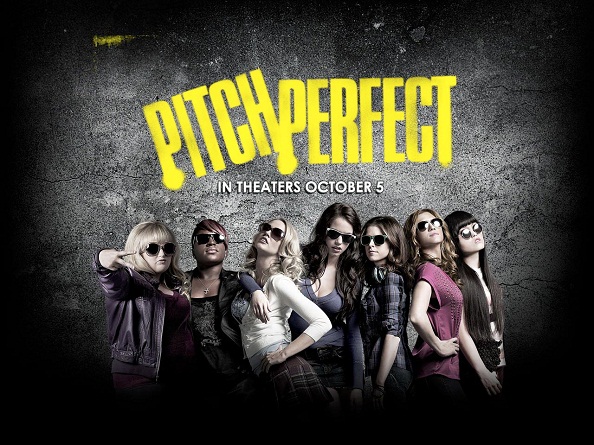 Synopsis: Beca, a freshman at Barden University, is cajoled into joining The Bellas, her school’s all-girls singing group. Injecting some much needed energy into their repertoire, The Bellas take on their male rivals in a campus competition.

It’s Friday and once again The Movie Blog presents another film that your significant other insists that you attend against your will. Regardless of your own desire to see the film, it is very unlikely that you will admit to wanting to see it or actually enjoying the film. When it comes to “Pitch Perfect,” this is one of those films that you will surprisingly enjoy.

When watching the trailer for this film it seems like this would be another film capitalizing on the popularity of “Glee.” While I hate to reiterate a cliche phrase like, “Don’t judge a book by its cover,” this phrase definitely applies here. “Pitch Perfect” slightly resembles what is conveyed in the trailer but there is a greater misconception that hides what the film actually is; much like the unexpectedly funny movie, “Mean Girls.”

The plot is very generic and predictable but in the comedy genre, a generic plot is acceptable so that the film can focus on the laughs. In between the laughs there is a story of a rebellious girl who unwillingly joins an all female, collegiate, a capella group. Of course there’s a love interest, predictable conflict, and achievement over adversity, but all of these elements are an added bonus as the comedy and music are what drives the film. Aside from the generic plot, there are many factors that distinguish this film from others that fall into the music genre. My favorite aspect of “Pitch Perfect” was the absence of the music acting as dialogue in the film. Unlike many musicals, the characters don’t break into song at pivotal moments to convey their feelings. There is actual dialogue and the music scenes are there for competitive purposes to show the progression of the group and the abilities of their competition.

The characters each have a unique characteristic that differentiates them from the rest of the group. These personalities mesh together in a way that provides laughs resembling the entourage of “Bridesmaids” or “The Hangover.” Although I have not found Rebel Wilson to be particularly funny in many films, I did find her humor to be very welcoming in this film. Her awareness of her out of shape figure combined with her overflowing confidence provided a type of humor that caught you off guard when being surrounded by her thinner well mannered teammates. Wilson was obviously the catalyst for comedy in the film, being that many of the other cast members were dependent upon her to drive their own characters’ moments of comedy which were few and far between. Anna Kendrick and Brittany Snow played their roles well, regardless of how simple and generic their characters were. Kendrick’s character had a slight edge compared to her usual conservative role but retained her eloquently spoken intelligent side that we’ve come to know.

Of course I can’t review a music based film without commenting on the quality of the music. To get an idea of what to expect, watch the clip of the “Riff Off” below.

Music preference is something that just can’t be critiqued, but in my opinion I thought the quality of music was excellent in this film. Regardless of whether they’re performing a song you particularly like or not, it is amazing to see the vocals, the riff, and other background music all being generated within the group. The a capella aspect of this film is what differentiates it by displaying a more unique vocal talent than just being able to sing a song.

This film was an absolute surprise. I thoroughly enjoyed it because it was able to exceptionally define itself in its comedy and music genre. The humor was unexpected and I caught myself laughing quite a bit, while the music throughout showcased the talents of the cast giving a vast amount of auditory stimulation. The plot was predictable and some characters were generic but it was unnoticeable due to the other aspects of the film.

The musical surprise of the year!