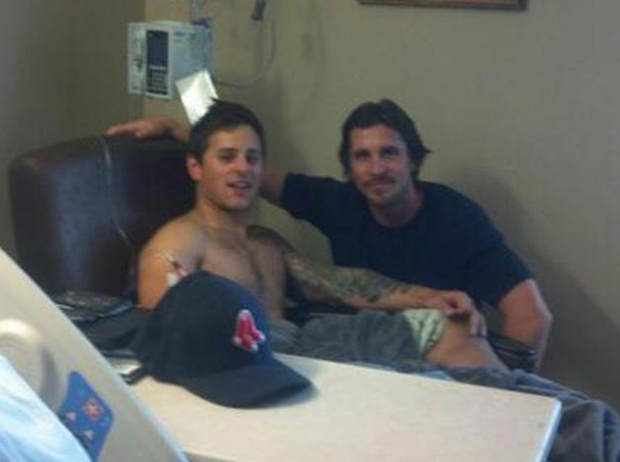 I like Christian Bale as an actor. Fine guy and he’s able to produce some great performances when given opportunity. Outside of films I’d always thought that he was the kinda guy that would be cool to meet but you might not wanna drink with him. Not heavily anyway. He just did something that quite honestly touched my heart in an unforeseen way as we’re learning that the Academy Award winning actor recently appeared at the Aurora hospital to visit the victims of the shooting.

On Tuesday afternoon, the victims of the mass Friday shooting in Aurora, Colorado received an incredible surprise when ‘Batman’ himself, Christian Bale, paid a visit to the Aurora hospital where they were confined. According to Bill Voloch, interim president of Medical Center of Aurora, the Academy Award winner, while accompanied by his wife, spent two and a half hours at the hospital. They met with seven of the victims, talked to visitors and staff of the hospital and even posed for pictures.

After the hospital visit, Bale and his wife visited the memorial set up across the street from the Century 16 movie theatre.

The most surprising part about this was that Bale made the trip entirely unannounced and on his own accord, with no representation from Warner Bros. studio, no press or photographers. In fact, the only way the story got out was when people began updating their Facebook and Twitter status with pictures of Bale and his wife at the hospital.

No announcement, no press, just dropped in to say hello and pass along his condolences. This man may be the new definition of ‘class act’ with that one single gesture. It’s extremely heartwarming to see hear news like  this and my appreciation for Christian Bale  has increased exponentially. Thank you Mr. Bale, you have made my day.