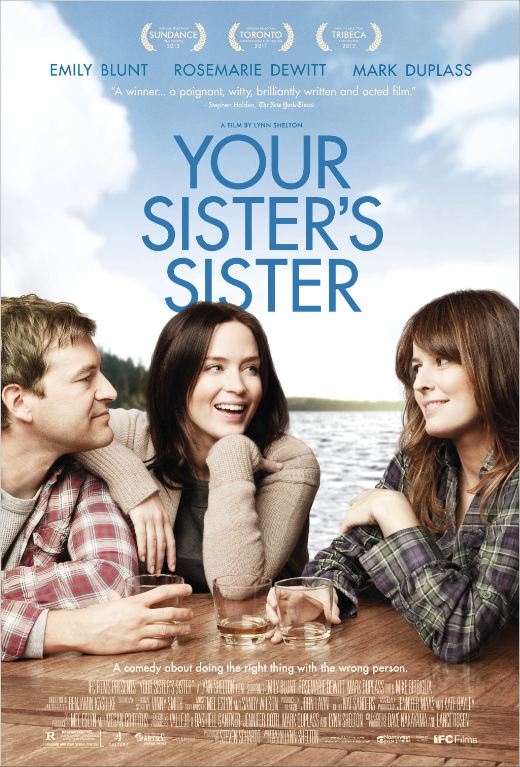 Seattle based director Lynn Shelton has a distinct yet traditional indie-style as a filmmaker. The award-winning director of 2009’s “Humpday” embraced the popular and emerging ‘mumblecore’ brand of younger, hip actors displaying gritty realism with sporadic improv. I spoke with director Lynne Shelton on the phone about her new film “Your Sisters Sister” including directing fresh talent, the embrace of improv, and the film’s perplexing ending. For some background on “Your Sister’s Sister” via IFC: “A year after his brother Tom’s death, Jack (Mark Duplass) is still struggling emotionally. When he makes a scene at a memorial party, Tom’s best friend Iris (Emily Blunt) offers up her family cabin on an island in the Pacific Northwest so Jack can seek catharsis in solitude. Once there, however, he runs into Iris’ sister Hannah (Rosemarie Dewitt) who is reeling from the abrupt end of a seven-year relationship and finds solace in Tom’s unexpected presence.” Alcohol, drunken sex, and the sudden appearance of Iris make for a complicated second half of the film. All the characters are caught up with their awkward emotions in the middle of their relationships.

For “Your Sister’s Sister,” Shelton instructed the actor’s what she wanted from each scene by allowing them the freedom to improvise.

With Lynn Shelton commanding the comedic drama’s somber and naturalistic  tone, Duplass effectively carries an emotionally charged opening scene efficiently operating with this honest technique. Shooting a complex moment in the film as Mark Duplass rants about his brother would be a challenge for average directors. Shelton had faith in her actors to accomplish the given tasks. By doing so, Shelton injects realism in her characters.

“I’m all about naturalism. I want to portray real people having conversation,” said Shelton. “I wanted this to feel like a documentary and we are dropping into these peoples lives. In the quest for making them likable, we make it less real. Improvisation helps in that quest.”

As tension increases, the viewer isn’t too sure they could trust Duplass making him the anti-hero of a protagonist. It was a formidable scene and poignant introductory moment Mark Duplass handles quite well.

“Mark really dug deep,” Lynne said. “I felt like he really surprised me and went with it. He really made the whole thing really comfortable.” Mark Duplass, is an actor for cinephiles and even casual movie fans to keep an eye on. He has had quite the year currently starring in the quirky and sincere “Safety Not Guaranteed” and the upcoming family drama “People Like Us.” Mark Duplass has become the Godfather of Mumblecore directing “Cyrus” and “Jeff Who Live At Home” and starring in Shelton’s “Humpday.” He stars as Peter on FX’s popular TV comedy series about fantasy football “The League.” It will be just a matter of time before he becomes an established mainstream actor.

The cast including Blunt and Dewitt convincingly pulls off the realism of improvisation thanks to the Lynn Shelton’s filmmaking. Improvisation might be tough to capture on film, but a talented director like Shelton made it work despite a tight shooting schedule. ‘Sister’ was shot it in 12 days with a 13 crew due to schedules of the cast and crew with a 70-page script. With a limited crew, short schedule and few actors, Shelton is able to focus on the characters as viewers slowly get to know them. Character development is a priority of quality for the director.

“I like making pieces where you turn the microscope on a few characters and their lives and interpersonal dynamics. This is extremely producible,” Shelton said.

And as writer/director, Shelton slowly reveals characters motivations to the viewer as a way to keep them engaged in the storytelling process. As “Your Sister’s Sister” progresses, the final moments of the film provide the viewer without much context or clarity. This is how director Lynn Shelton wanted to convey the situations these characters found themselves in.

“That was the way we always wanted to end it,” Shelton said. “We had some alternate ideas, [but] I was happy that it worked out.”

“Your Sister’s Sister” is rolling out in limited release in various markets during the coming weeks.