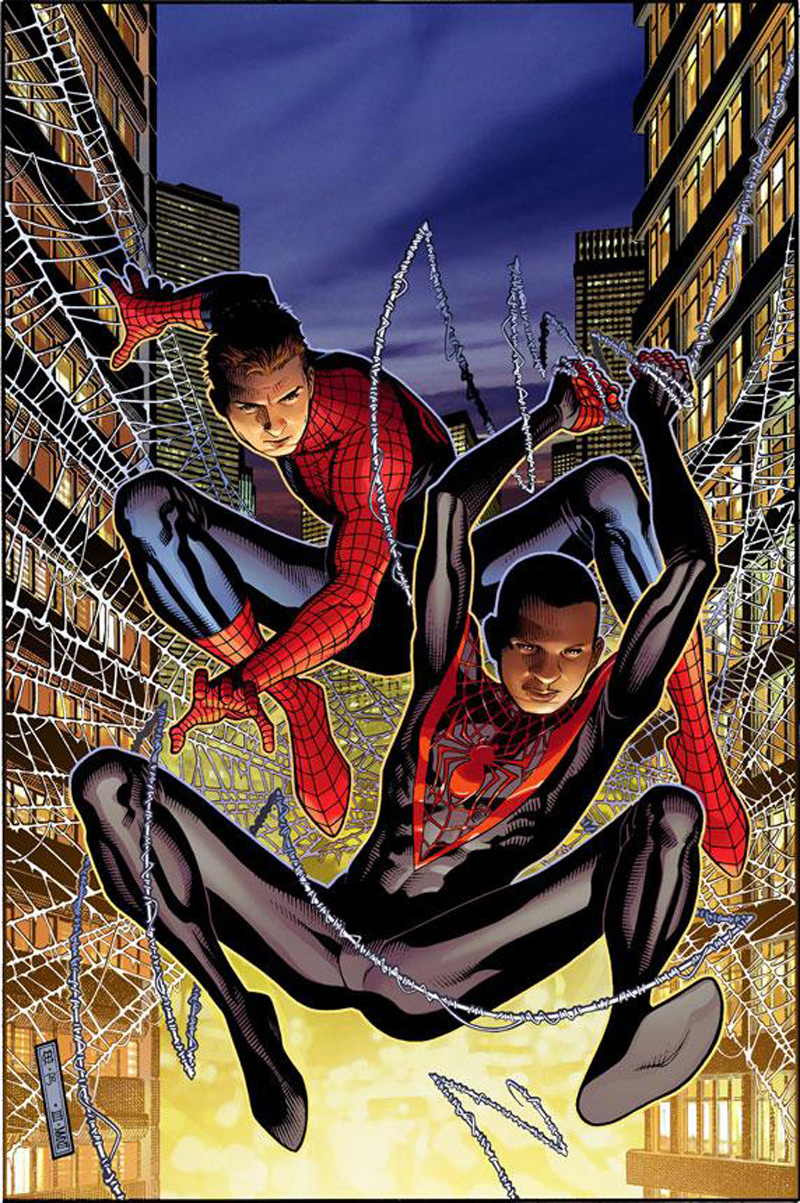 Even the best of friends sometimes disagree. Ryan and I often talk about our interests throughout the mundane work day and we recently had an interesting conversation about Original versus Traditional. New vs. Old. Peter vs. Miles. How the heck did we get to such a topic? The conversation was sparked by my interest with Marvel’s idea off killing Peter Parker in their Ultimate Spider-man comic and replacing him with a new face in Miles Morales. I was in favor of the idea and thought it was a bold and brilliant idea to further exploit their “Ultimate” universe by shaking up the status quo. Ryan felt differently and the conversation brought up some interesting ideas and thoughts about maintaining the familiar and tradition that people have learned to love with the more infamous Marvel characters. Ryan went on to quote Joss Whedon in our conversation about the idea and here’s what Whedon had to say relating to his experience directing the Avengers: “You know, I’m very torn. It’s an enormous amount of work telling what is ultimately somebody else’s story, even though I feel like I did get to put myself into it. But at the same time, I have a bunch of ideas, and they all seem really cool.”

This was an interesting thought that made me look back in retrospect at Joss Whedon’s career and body of work. Whedon has garnered some very vocal fans over the years dating back to his work on Buffy. I loved Buffy at first but eventually thought things got a bit too convoluted for my tastes and jumped into ‘Angel’ when that became available. After a couple of seasons of that I saw the same thing happening and decided it was my time to depart that show as well but in those initial stages of development is when those shows garnered my interest. Whedon kept my interest in his work and he continued to make other shows like Firefly but never had the success that reflected what most fans of his knew he deserved. Firefly was cancelled after 1 season and the film spin-off didn’t bring in the box office figured that would one would define as ‘successful’ and instead raked in an underwhelming $38 million on a $39 million dollar budget. Ouch. Whedon has had mild success with his storytelling with the well received “The Cabin in the Woods” which was able to rake in $54 million on a $30 million dollar budget but nothing like he’s been able to do with the Avengers which is consistently Hulk Smashing the box office and is currently tabulated at over $1 billion on a $220 million budget. At this point does Whedon even need to make an Avengers 2? He’s certainly earned over a billion reasons why just about any studio would let him do anything he wants at this point. Heck he could make a Serenity 2 and 3 back to back with the figures that the Avengers earned but should he return? Does he want to make another or would he rather try his hand at working with original material again? That quote certainly made me feel that it wasn’t his main passion. Whedon didn’t have very many original ideas in his Avengers movie and stuck very close to what was introduced in the source materials which resulted im an amalgam of the main marvel universe and the ‘ultimate’ line of books which is somewhat original.

The thought then made me think about what Christopher Nolan has done with the Batman franchise. Christopher Nolan had a career of making and creating and directing films that were innately more original to critical success. My first exposure to the director was with the film ‘Memento’ starring Guy Pearce which earned over $39 million on a $9 million dollar budget and went on to be nominated for an Oscar for “Best Screenplay”. It was an original idea by the brothers Nolan as the film was an adaptation of Jonathan Nolan’s “Momento Mori”. Nolan refining by adapting his brothers work earned Christopher his first Oscar nomination. Sure, he worked with his brother but it was an adaptation of someone else’s work. Nolan went on to receive further success with 2002’s “Insomnia” starring Al Pacino and Robin Williams which was a remake of a Norwegian film of the same name. There were changes to the plot and characters but the source material was still someone else’s work. The next film in Nolan’s career was Batman Begins which generated $372 million on a $150 million dollar budget. Clearly working on a recognized work of material with his style of film making is where Nolan found an avenue to further showcase his talent. Nolan then made ‘The Prestige”. The Prestige didn’t “flop” as it earned over $109 million on a $40 million budget but it didn’t get the reception as Batman did for him although it too was an adaptation of someone else’s work this time being from Christopher Priests’ novel of the same name. Nolan then went to have his biggest film to date with was “The Dark Knight” which went to earn over $1 billion. Nolan has heavily derived inspiration for these films from the stories within the comics based on batman and amalgamated stories from both Frank Miller, Alan Moore, Jeph Loeb, and more and littered each of the films with his own ideas and practices throughout. Nolan then decided to return to something more original and lest recognizable with “Inception” which was a film he originally pitched to Warner Bros back in 2001 but felt he needed more big budget film experience before further developing that film and instead dove into creating his first Batman Film. Inception went on to earn over $800 million on a budget of $160 million.

My point being is that these two filmmakers were definitely talented and definitely capable of crafting stories that could capture the attention of millions, but first needed to broaden their experience and creative muscles with films that were easier to be accepted by the mainstream audiences before they were sought out by the audiences for their films. Not everyone can hit the ground running with something completely original and get the exposure that some of these stories deserve. Personally I think Joss Whedon should look into doing one more Avengers movies and then try to further expose his original talents and create his ‘Inception’ before abandoning the Avengers franchise. To bring this post to full circle if Miles Morales was named anything other than ‘Spider-Man’ within the comics than I think the creators would have had a hard time getting his stories the attention they probably deserve without first creating his avenue with Peter Parker. Original ideas are great but in order to get through the dense, and sometimes fickle, wall of mainstream acceptance toward the road of  ‘financial success’ you occasionally need a trojan horse.

12 thoughts on “Are original story ideas better than adaptations?”