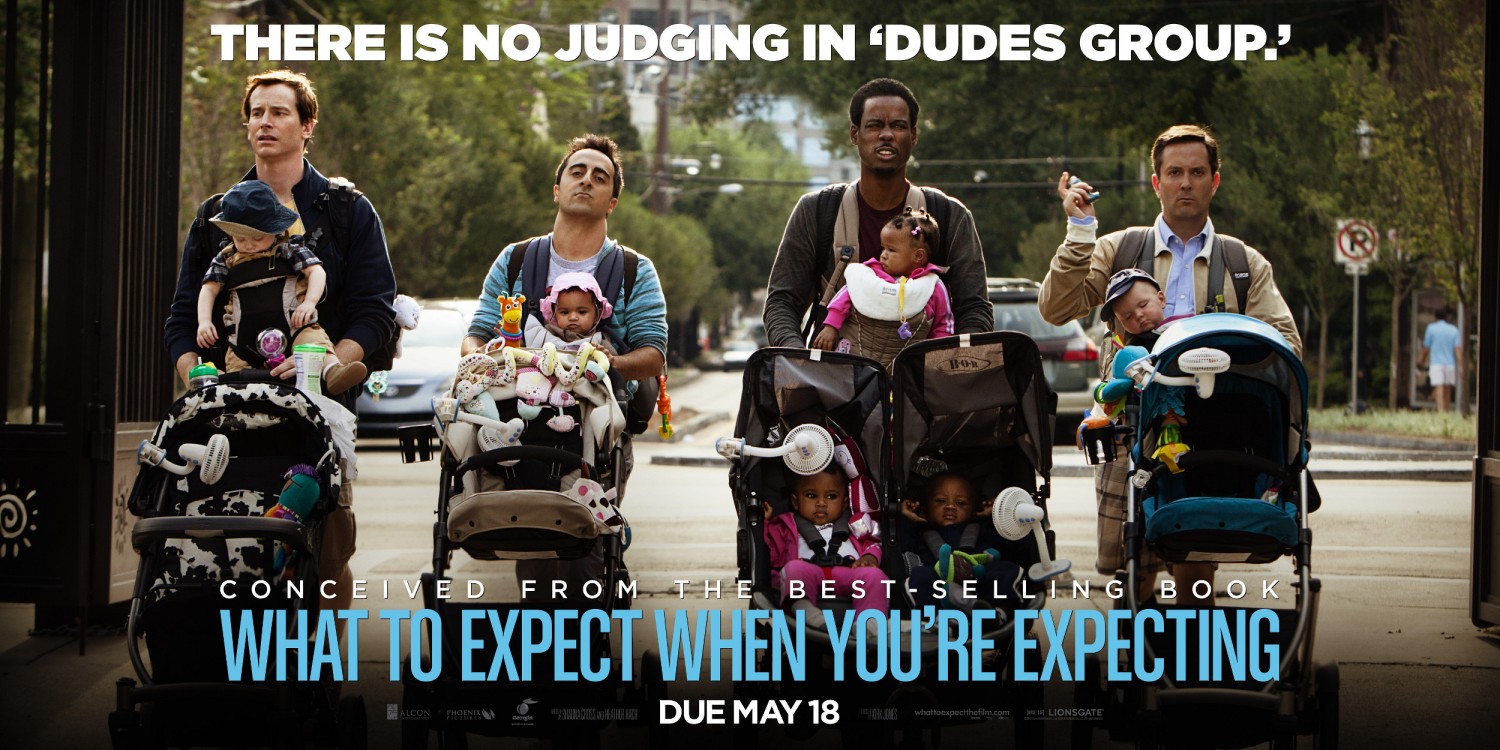 Plot: In Atlanta, Georgia, various couples expecting children interact or intersect with each other. Jules, (Cameron Diaz), is a host of a ‘Biggest Loser’-like show performing as a contestant on,  (This is worse then it sounds), a ‘Dancing with the Stars’ like show. Her dance partner Evan, (Matthew Morrison), sleeps with her and faces the consequences of an unexpected pregnancy in their late thirties. Wendy, (Elizabeth Banks), owns a breastfeeding baby boutique where Janice, (Rebel Wilson of “Bridesmaids”), works alongside her delivering awkward wisecracks. Wendy’s husband Gary, (Ben Falcone), is a nervous wreck coming to terms with his own father, mega-rich former NASCAR driver Ramsey, (Dennis Quaid), who also is expecting a child with his trophy wife Skylar (Brooklyn Decker). Holly (J-Lo) isn’t able to conceive so she decides to adopt an Ethiopian baby with her hesitant husband Alex (Rodrigo Santoro). Rosie, (Anna Kendrick,) and Marco, (Chase Crawford), are competing chefs who both own food trucks who hook up and get pregnant.

Review: During my morning workout last week, a TV spot on ESPN for “What to Expect When Your Expecting” caught my eye. Instead of seeing Cameron Diaz exotically performing on a dance show or Elizabeth Banks’ emotional rant about pregnancy, the ad focused exclusively on the dads who are in ‘The Dudes Group.’ Lionsgate did something risky, witty, manipulative and brilliant with an advertising campaign, which focuses on the dads. For my complaints about the lack of segmented marketing in Hollywood, I have to give Lionsgate props for attempting something new! Putting this ad on ESPN is the place to do it. Screentime is spent more on the pregnant women then goofy dudes in this all-star romantic comedy “What to Expect When You’re Expecting.” One of the few refreshing elements is that this movie doesn’t take place in New York, Chicago, or Los Angeles and is mostly void of Southern stereotypes. The biggest weakness is how it focuses on the shallowness and narcissism of our culture. Gary was a reality TV contestant on a ‘The Biggest Loser’ type show and his wife Wendy becomes a YouTube sensation with her pregnancy rant. It’s a reminder that the fun things in life are the fifteen minutes of fame courtesy of our obsessive compulsion for media saturation! Delta Airlines is shamelessly plugged to remind us its hub is in Atlanta. Also, the infusion of money from the airline was probably a cost control way to keep the budget cheap despite the large cast. In a movie full of superficial sitcom situations and contrived, stale jokes, the subplot involving Anna Kendrick and Chase Crawford deserved a better movie, if not their own one. Without spoiling their progression, their subplot provides the brutally honest perspective of pregnancy I wasn’t anticipating. Every other story sorely lacked their realism.

The plotlines are so predictable you wont be asking if something will happen, but rather when. When will all the couples meet each other? Will they deliver at the same hospital at the same time??? of course! Critic circles will have to ‘expect’ that a movie such as “What to Expect” is critic proof among women. If Us Weekly still had a critic, this would make their year- end Top Ten list. Though not as dreadful as the all star cast movies of “He’s Just Not That Into You,” “Valentines Day,” and “New Years Eve,” it is mediocrity without really trying to achieve something greater. Meh…!

Conceived from the best selling advice book of the same name, “What to Expect When You’re Expecting” is the RomCom that ultimately fails to say something interesting or enlightening about pregnancy. Despite all the fertility on screen, it is pretty sterile. Brooklyn Decker captures the essence of the film as the shallow, bubbly Southern, and rather stupid trophy wife expecting twins.

Don’t ‘Expect’ a Dad’s “Hangover” Among the Dude’s Group in Lionsgate’s Pregnancy Comedy.
The cross-generational comedy is done much better in a “Father of the Bride” sequel then here.
The Food Truck has already solidified itself as the RomCom cliché of 2012

One thought on “Review: What to Expect When You’re Expecting”