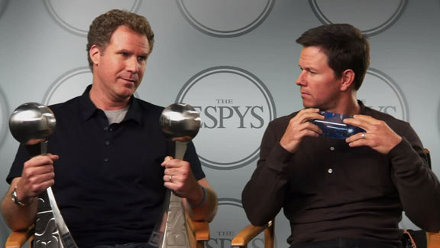 Will Ferrell and Mark Wahlberg had quite a bit of success with last summers’ “the Other guys” and it seems that the duo would like to re-team for at least 1 more project that involves football, turkeys, and somewhere they squeeze in some comedy.
Source: Deadline

Warner Bros has closed a deal for Turkey Bowl, a comedy that will re-team The Other Guys stars Will Ferrell and Mark Wahlberg as guys from football-obsessed towns who lead rival teams in an annual tackle football game for bragging and trash-talking rights. The tackle games are grandiose, and I’m told they plan to pack it with fun cameos, just the way they did during the rival broadcaster gang fights in Anchorman: The Legend of Ron Burgundy. Alec Baldwin is already aboard as Wahlberg’s father.

Do they really think that they can make a movie with these losers without showcasing the real stars of the Other guys? The Rock and Sam “mutha flood puckin” Jackson are the real reason people packed into theaters to watch that movie. They better appear as part of the team. Hell, they are the team! Radar status: secured.

One thought on “RUMOR: Ferrell and Wahlberg up for Turkey Bowl”