Daybreakers is a film that I’m very excited to see… but at the same time sounds an awful lot like I Am Legend, with the big exception being the cast of Ethan Hawke, Willem Dafoe and Isabel Lucas (the new little hottie from Transformers 2). Listen to how the film is described and tell me if it’s not very familiar:

In the year 2019, a plague has transformed most every human into vampires. Faced with a dwindling blood supply, the fractured dominant race plots their survival; meanwhile, a researcher works
with a covert band of vamps on a way to save humankind.

Now granted, what makes this kinda cool to me is that it seems to be taking on the “already done” story and telling it from the perspective of the vampires. I like that a lot and has some potential. Anyway, a new Daybreakers teaser poster has hit the web and I though I’d share it with you: 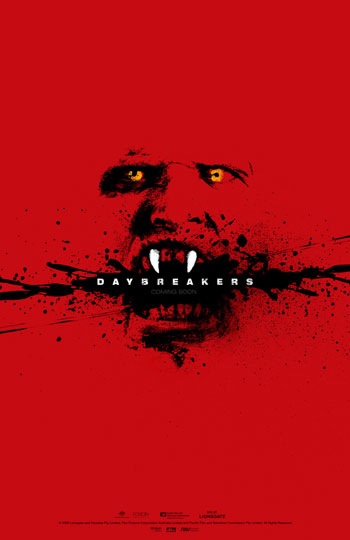