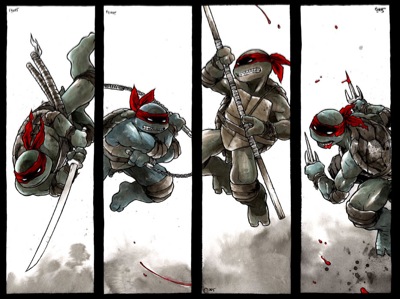 The other day on an episode of Uncut, Campea mentioned that he thought the next turtles film would feature CGI Turtles and live action humans – Peter Laird has confirmed that this will in fact be the case. We get the following quote from our friends at MTV:

As it stands now, there is no intention of doing another live-action film like the first three, with actors and stuntmen in actual Turtle suits, contrary to what was said by Kevin. We have pretty much decided that the next “TMNT” movie should be what we’ve been calling a “hybrid” — that is to say, live-action humans and sets combined with very realistic CGI Turtles (and possibly some other CGI characters).

Laird starts the interview by blasting Eastman for leaking information about this upcoming film. Apparently Eastman sold his rights to Laird, and still wants to talk about he franchise. I can understand Eastman’s attachment to the franchise; but if he sold his share, fair is fair. Laid goes on to explain that more news will be released shortly, when he feels the time is right.

I personally wanted more “man in suit” turtle action. I can live with motion capture turtles, but wouldn’t be pleased with straight up CGI characters. If they are going to fight with humans, you need to keep the interaction real and the action fast. With motion capture, the actors have a human placeholder that they can emotionally respond to and fight with. Call Zemeckis, the guy eats mo-cap for lunch.