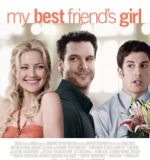 So when you go into a movie theater to see a film where the star has given us such comedic classics as “Employee of the Month” and “Good Luck Chuck” (please note sarcasm), how high can your expectations really be? Dane Cook has a very successful stand up comedy career… but up till now he’s proven over and over again that he has no business being in the movies (at least as a lead or feature character… he was fine as “The Waffler” in Mystery Men). But hey, give a movie a chance… Cook has Rom Com veteran Kate Hudson backing him up so this one is sure to be better than his last couple of efforts right? Ummm…. no.

The synopsis for My Best Friend’s Girl reads something like this: “Tank (Dane Cook) is put to the ultimate friendship test when his best friend Dustin (Jason Biggs) hires him to take his ex-girlfriend Alexis (Kate Hudson) on a lousy date just to show her how great her former boyfriend is. When Alexis finds Tank more fascinating she decides that she wants Tank, and wants to take him to a wedding instead of Dustin. Dustin tries to become more like Tank in an attempt to get Alexis back. In the meantime, Tank is trying to make Alexis like Dustin again, but Dustin is trying to mess up the wedding and ruin Tank’s and Alexis’s relationship at the same time.” Sound cliche and convoluted? Well that’s because it is.

Alec Baldwin carries with him the POTENTIAL to save just about any movie. The man has become like another Bruce Campbell to me. His comedic timing over the years has just gotten better and better. He is one of those rare guys to can punch you in the face with a powerful dramatic scene… and then make you laugh your guts out with his comedic absurdity. In his scenes in My Best Friend’s Girl you could see Baldwin giving everything he had in an attempt to salvage this movie. Alas… even he couldn’t do it. The script was SO bad… even Alec Baldwin couldn’t make it funny.

Yes… that’s right… the only thing I have to list under the “THE GOOD” section is that fact that Alec Baldwin TRIED to make it good. Yikes.

Not once during this horrible horrible movie that claims to be a “comedy” did the film even make me grin. Forget about laughing… forget about giggling… the stupid ass movie didn’t once make me grin. I’m not kidding. I can get over a lot of stupid stuff in a comedy if it at least makes me laugh. But without the laughs, all the major flaws of the film stand out like a stripper in a day care center. And trust me, there were a lot of flaws.

Dane Cook once again proves he has no business trying to lead a film. He can’t do it. He simply doesn’t have the talent nor the presence nor the charisma nor the charm to carry anything. He may be a very good comedian (which may people disagree about), but that is a VERY different thing from being an actor. He simply fell flat through the whole film and never got me interested in the character whatsoever.

Jason Biggs should pretty much just retire. The “American Pie” one hit wonder has gone on to show us he doesn’t have anything else in his creative tank. They tried once to launch him a an A-List comedy performer with “Saving Silverman” which was a disaster from which he’s never been able to recover. Once again he returns to the screen as the lovable (even though there was nothing lovable about him) loser, and once again he fails at it.

I’m sorry, but the whole concept and execution of this mess was pathetic.

My Best Friend’s Girl is an unbelievable, poorly acted, poorly directed, poorly written mess of a “comedy” that never once makes you laugh. Even Alex Baldwin couldn’t help it. The only thing left to do is put it out of its missery. A terrible film that you should NEVER waste your valuable time or money on. If you do… don’t say I didn’t warn you. Overall I give My Best Friend’s Girl a 1.5 out of 10.

You can see the video version of our My Best Friend’s Girl review here: