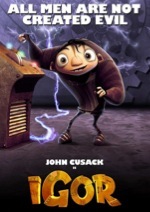 Thanks for checkout out our Igor review. If you’d like to watch a video version of the Igor review you can view it at the bottom of this post.

The world of 3D animated films is getting more and more crowded. There is still one undisputed king of the hill when it comes to 3D animated movies… and that’s clearly Pixar. I find myself having a hard time getting too excited about any animated film that doesn’t come from them these days (although as Kung Fu Panda demonstrated, there are exceptions).

On the surface, Igor looks like a poor mans version of a 3D animated film. Frankly from the trailer it looked more like a student film from one of those animation schools you see advertised on Spike late at night. But hey, it’s got John Cusack attached so how bad can it be right? Well…

The idea for Igor is actually a pretty creative one. In a country called “Malaria” the people were once happy and prosperous farmers until mysterious clouds covered the land leaving it in permanent darkness. To survive, the country changed industries from farming to evil mad science!!!! Now the celebrities are the best evil mad scientists… and in Malaria if you are born with a hunch back, your name is changed to “Igor” and you become assigned to an evil scientist as their stupid and slow witted assistant. However, one Igor (John Cusack) is actually quite brilliant and dreams of being recognized as the greatest mad scientist in the world… if he can get people to look past the fact that he’s an Igor.

As mentioned above the basic premise of Igor was a very creative one. Not only is the idea a funny one, but it also introduces the themes of class and rising above your situation to achieve your goals (which is always nice). The concept of having a main character (Igor) who is such a good person, who just happens to aspire to be really evil was hilarious.

The character “Scamper” (voiced by Steve Buscemi) was fantastic. Scamper is a rabbit who also happens to be one of Igor’s first and most successful experiments. You see… Igor made Scamper immortal. The rub is that Scamper is a suicidal noir existentialist who is constantly trying to kill himself. That may sound really dark (I guess it is), but the results are hilarious.

It’s hard not to get attached to Igor. The character himself is the center of the charm of the film. He’s endearing, yet flawed and Cusack’s voice (even though I’m not a huge fan of movie stars doing voice work) seemed to nail who this little guy is.

Who knew blind orphans could be so funny?

How many times have we seen movies with a great starting idea… but then ultimately fall flat because of a weak story to flesh it out? Sadly, Igor is one of those movies. The movie really is just a premise filled in with mostly weak attempts at humor (aside from Scamper) and dumbed cliches.

The main “love interest” in the movie is Eva (not to be confused with Eve from Wall-E), who is to be Igor’s greatest creation. She’s basically Frankenstein with a twist… instead of turning out evil, she’s actually very “good” and thinks that she’s an actress. Sadly, it plays out just as stupid as it sounds.

I know Igor is just a kids movie, but if other kids movies can some up with viable conflicts, limit plot holes and build things towards a solid ending… why can’t this one?

Speaking of being a kids movie… there were a few moments in the film where I thought to myslef “If I were a parent here with my kid, I’d be uncomfortable with some of the stuff in this movie”. There is lots of talk about murder and death and suicide that may be a little too dark for having your 7 year old kid at.

Igor is a poor movie in most respects that ends up being palatable due to some solid charm and the humor brought by the Scamper character. Not a good movie… but one you may find yourself enjoying watching nonetheless. Overall I give Igor a 6 out of 10.

You can watch the video version of this Igor Review below: