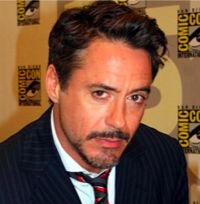 I read this interesting snippet from an interview with Iron Man star Robert Downey Jr. on his take of The Dark Knight.

“My whole thing is that that I saw ‘The Dark Knight’. I feel like I’m dumb because I feel like I don’t get how many things that are so smart. It’s like a Ferrari engine of storytelling and script writing and I’m like, ‘That’s not my idea of what I want to see in a movie.’ I loved ‘The Prestige’ but didn’t understand ‘The Dark Knight’. Didn’t get it, still can’t tell you what happened in the movie, what happened to the character and in the end they need him to be a bad guy. I’m like, ‘I get it. This is so high brow and so f–king smart, I clearly need a college education to understand this movie.’ You know what? F-ck DC comics. That’s all I have to say and that’s where I’m really coming from.”

I’m floored by how many brainless fan boys on the internet are already hammering Downey for his opinion on a movie. I’ve already read words like “Should shoot himself in the head”, “I hope he dies”, “Robert Downey is a fucking walking abortion, what a tool”. Yup, intellect amongst the online community is really sharp isn’t it.

Here’s the truth. Every single one of us have at least ONE movie that EVERYONE loves that we hate. There is no exception… we all have at the very least 1 or 2 of those movies. Most of us love The Dark Knight. Ok, great. I just went to see it for the 3rd time on Tuesday on IMAX again and loved it just as much this time around. But that’s just my opinion. Downey has a different opinion. Fair enough.

I’d love to see these spineless jellyfish who bash a guy just for his opinion handle the heat if they weren’t such massive pussies and publicly honestly listed all the popular movies they hate for the mob to lynch them over.

Good grief, people are reacting like Downey said he likes to insert his penis into the bums of 8 year olds. Boo Hoo… not everyone worships the movie you’d blow if it were a physical guy. Get over it.