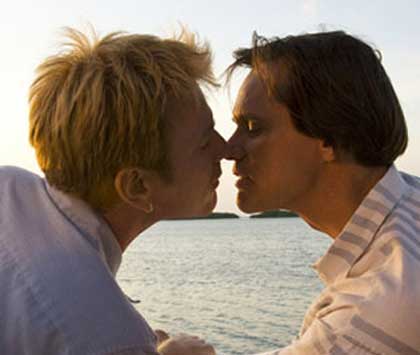 We get our first peek at Jim Carrey and Ewan McGregor getting all mushy in I Love You Phillip Morris.

The script was based on the book by the same name from the Houston Chronicle crime reporter, Steve McVicker. Carrey stars as Steven Russell, a happily married con-man who finds himself falling in love with his cell-mate, Phillip Morris (as played by McGregor). Russell spent years defying the judicial system, and also spent most of his criminal career hopping in and out of prison through a variety of elaborate schemes. Russell even posed as his Morris’ lawyer to get him switched to a closer prison. But it all came crashing down when in 1988, Russell was sentenced to 144 years in prison. Leslie Mann joined the cast back in April as Carrey’s abandoned wife, and Santoro also stars as another of Carrey’s paramours.

Back in the day, it used to be that celebs would strive for the mentally handicapped role to get a better shot at an Oscar. Then Brokeback Mountain put the gay in the film mainstream and everyone thought it would be the new gimmick. Even Brad Pitt expressed a desire at a gay role in hopes it would increase his Oscar potential.

Now its been a while, so I don’t know that it was the motivation for this role for Carrey (or McGregor) but it is a dramatic role. I honestly do like Jim Carrey better in dramatic roles. I kinda got worn out on him in comedy, but I still like him. When Jim gets in the groove he can hit it out of the park. The Majestic was a great movie for him and I loved him in it.

21 thoughts on “First Look at I Love You Phillip Morris”