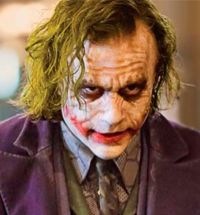 “I can’t believe how stupid some people are and how easily they get brain washed by marketing. Why are people saying Heath Ledger’s Joker was so good in The Dark Knight? It totally baffles my mind when obviously Heath Ledger’s Joker was total bullshit. Why did they even bother naming that character “The Joker”? That so called Joker was nothing like the real joker. They should have called him something else like “Scary White Make Up Man” or something along those lines.

First of all, the real Joker is INSANE. Not eccentric, not wild, not misunderstood. He’s certifiably and clinically insane. He is the paradox to Batman’s order. The so-called-Joker in Dark Knight was totally wrong. He was just eccentric, but also really calm. Yeah he was evil, but he wasn’t insane.

Secondly, what the hell was with the razor cuts? Show me where the hell in the comics where The Joker got his iconic and legendary smile from razor cuts? That was a spit in the face to all Batman comic fans. The Joker’s smile is as iconic as the Superman Emblem. What do you think people would say if they suddenly replaced the Jor-El family crest with a crayon drawing “S” that some dying kid in Hospital gave Superman early in his career? They’d riot in the streets! Joker got his smile from razor cuts??? Why not just make an Aquaman movie where Arthur can’t actually swim. That would make about as much sense.

Third, the white face. The REAL Joker has a white face that he disguises sometimes with flesh colored make up, but this so-called-Joker in The Dark Knight does completely the opposite thing. We all know how the Joker got his white skin, but apparently Christopher Nolan couldn’t be bothered to read a comic book or two to find out for himself. This was blasphemy to any self respecting comic book fan.

The Dark Knight could have been a good movie, but that character they had in there as the bad guy wasn’t The Joker. It was someone else that sort of bore a resemblance to The Joker in some ways, but that wasn’t him. They messed it up totally, and if you like Heath Ledger’s so-called-Joker, then you know nothing about Batman or comic books. Nuff said.”

Ok, now everyone take a deep breath and put your gun away. I don’t really think any of those things I wrote above. So why did I write it? Well, because this issue seems to come up whenever a comic or literary story gets brought to the big screen.

Just this morning I got an email from someone telling me about why The Punisher movie was going to suck because of a list of details that this movie has that are in conflict with some details from the comic book. Same discussion has been going on with the origins of Wolverine. We all know the debates that went on over the design of Megatron in the Transformers movie. Hell, there were tons of real reasons to hate Jessica Alba for Sue Storm in the Fantastic Four franchise, but just because she’s not a natural blonde isn’t one of them.

My argument, when talking about how strictly movies should stick to the source material, has always been that adaptations sometimes need to be made between mediums. Just because one thing works on a comic book page doesn’t mean it will work on a movie screen, and so compromises are sometimes needed. My main question is “Do they stick to the SPIRIT of the characters, rather than making sure they have the right eye color or size of shoe.

Really, the bottom line is “does the character work in the movie or not”, not “how perfectly does the character match the comic character”. The fake note at the beginning of this post was one that I expected to read about 100 times from various people… but thankfully I haven’t got more than 2 or 3 of them.

Ledger’s Joker NEEDED to be adapted for the story and world that Nolan had created. Jack Nicholson’s Joker simply would not have fit with Nolan’s Dark Knight world. He would have come off as silly and ridiculous in this setting. To really nail the spirit of The Joker in the context of Nolan’s world, those changes NEEDED to be made… and I think 99.9% of us agree the changes were for the best and worked perfectly.

If people were consistent with how the expect other comic characters to be exactly like how they are on the printed page, then letters like the one above would have been pouring in. Thankfully that hasn’t happened… so thanks to the Joker, maybe in the future less people will jump up in arms when they see deviations from the source material in an upcoming movie. Maybe if the first designs of Thor come out and he’s not wearing feathered wings on his head… that it MIGHT still be ok. Maybe.