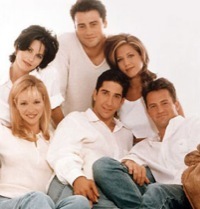 The other day word started spreading around that due to the success of the “Sex and the City” movie, a “Friends” movie project has been put into motion. Makes sense really… I mean after all… none of the former Friends stars have been able to mount successful movie careers at all. Sure, Jennifer Aniston has been IN a lot of movies, but most of them bad and most of them bomb.

I’d go so far as to say a “Friends” movie would be even more successful than the SATC movie. I think it has broader appeal and also had a larger audience. The movie would be cheap to make (Anyone who thinks it they would have to pay the former stars a penny over $5 million each is crazy) and wouldn’t require the worlds largest marketing campaign either.

Don’t get me wrong… I’m not saying the movie would be GOOD, I’m just saying it would make money.

However, seems those rumours have now been completely shot down. WB issued statements saying the rumors are false, and the BBC contacted some of the cast’s agents who flatly denied any truth to the whispers. So there you have it, no Friends movie. I personally couldn’t care less (except for the fact that I’d like to see Courtney Cox in a high profile role again), but if I were a studio exec, I’d make this thing happen. (Source: IMDB)

12 thoughts on “There is No Friends Movie In The Works”