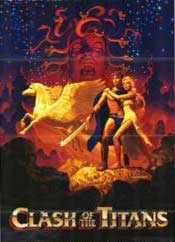 Thanks for checking out my review in a new feature I like to call Forgotten Gems.

The film I want to review today is not unheard of, but many people under the age of 30 may have never seen it or maybe tripped over it as the movie of the week on PBS. Which means you still haven’t seen it.

Today, the movie I want to review is Clash of the Titans.

This 1981 film tells the tale of the Greek Gods of Olympus and the specific story of Perseus. This spans his adventures of defeating Calibos, capturing the heart of Princess Andromeda as well as facing the Kracken and the gorgon Medusa.

The effects are half of the fun in watching this. The stop-motion model animation and poor green-screening almost give credit to the charm of this film. Still, the epic tale is told so cleanly.

The scenes with the Gods are always a display of their power, pure and unaccounted. The transitions of the story told from the seat of the Gods as the story unfolds to the mortal realm is inspired. Every scene is delivered like a Shakespearean play with little musical score until there is a true moment of plot that requires its punctuation.

The casting was great. When they called a man blessed for his handsome face, he was. Andromeda is considered the most beautiful of mortals, and she is a vision. You really feel the status of these heroes as they own up in appearance and presence. Even the clockwork golden owl Bubo is brought along for comic relief that doesn’t come off as childish or camp. And no greater presence in his day, Laurence Olivier as Zeus Himself!

Keep an eye out for the playwrite and side kick to Perseus played by Rocky’s coach (and the Penguin) Burgess Meredith. Also the goddess Thetis, mother of Calibos is played by Harry Potter’s Professor McGonagall, Maggie Smith (who was quite striking in her day).

The story may hold up to the ravages of time, but the effects don’t. I commented that these dated effects are truly weak (by today’s standards) but they once served as the swan song of Ray Harryhausen, who not long after this film retired from movie effects. Perhaps he felt he would never top himself. At the time that this came out these effects were groundbreaking. But now in the light of so many effects that make the impossible look real, the effects in Clash of the Titans might be a distraction.

Typically this is where John or Doug would write a “Out of 10″ rating, but since all of these Forgotten Gems are going to be what I would rate a 8, 9 or 10, I have made my own rating system.

TV – Make a point of watching it if you see it listed on TV.
Rent – Good enough to go out of your way to see it, but not enough to buy it.
Buy – So good. You will watch it again and again. Buy it!

So on a scale of TV, Rent or Buy I give Clash of the Titans a BUY!

A true classic that was not only an epic tale worthy of re-telling, but also an effects benchmark that makes this a worthy addition to your collection, if only for its collector’s value.

Watch it, and you will watch it again!

21 thoughts on “Forgotten Gems: Clash of the Titans”