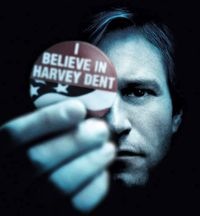 The other night I was being interviewed on WGN in Chicago and the one and only topic of conversation was The Dark Knight. We were basically talking about how great the movie is, how Heath Ledger deserves an Oscar nomination and all that jazz… when the host suddenly said: “You know, our station Film Critic said the only thing that was really horribly about The Dark Knight was Aaron Eckhart as Harvey Dent”. To which I replied: “Then your station critic is an idiot”.

Now, I said that sort of as a joke because obviously all film is subjective and I later felt bad because as the conversation went on I forgot to say I was kidding about him being an idiot. But that’s not what this post is about. What that interview highlighted for me was that in the midst of all the praise we seem to be giving The Dark Knight, in the craze of talking about how much Ledger deserves that Oscar nomination, how good the story was yadda yadda yadda… we all (myself being quite guilty of this too) have seemed to over look the person I would say was actually the soul of The Dark Knight… Aaron Eckhart.

So right now I’d like to propose to you 3 reasons why I believe Aaron Eckhart was indeed the soul of The Dark Knight:

#1 – He Was The Embodiment Of The Hope Of Gotham
Now don’t misunderstand that statement. The highlight of the movie was Ledger, the driving force was Bale… but in the midst of this battle of two conflicting world views of the Joker and Batman, Harvey Dent’s character was the one who embodied and represented US. He was the manifested spirit of Gotham’s hope and of what the city COULD be. In essence he was the tangible realization of Batman’s dream. Do you realize how easily other actors could have made the character slip into some cheesy boy scout wannabe?

#2 – He Grounded The Film
No one will agree with this at first, but think about it for a moment. If you remove Harvey Dent and the way Eckhart played him to perfection, The Dark Knight would basically devolve back to simple (although still really intense) comic book movie. It would have just been good vs bad. Batman vs Joker. But Eckhart brought an extra dimension. He really was Nolan’s secret ingredient that changed the flavor of the whole soup. He takes the film to another level by making The Dark Knight about he people of Gotham as well as the titans (Joker and Batman) of Gotham.

#3 – The Relatable And Fallible Hero
One of the things that takes the edge off of many movie heroes is the perceived infallibility of the heroes. Heck, despite some self doubts, even Batman comes off that way most of the time. Unbeatable, incorruptible, unwavering. Perhaps those qualities are important for the character and they have to be that way, but it still leaves him being unidentifiable for most of us. Harvey Dent is a different character. Completely steadfast in his ideals and beliefs, but when faced with the madness the Joker brings, or with the life of his true love being threatened, he shows that he’s only too human, that he has weaknesses, that he’s fallible. I don’t think most of us realize how nearly impossible pulling that sort of diversity off can be for an actor in the midst of a movie like The Dark Knight. Eckhart pulled off both aspects so well, that Dent become our identifiable point in the movie. He become our anchor.

I can’t say enough good things about the job Aaron Eckhart does in The Dark Knight. I’d go so far as to say that he nearly does just as well as Ledger does as the Joker (it’s just that the Joker is a far more charismatic and extreme character and thus much more noticeable). The fact that Eckhart just blends into the story instead of standing on top of it is a testament to the job he did as an actor. So for the next couple of years we’ll all talk about how great Ledger was (and rightfully so), and we’ll talk about how Bale is the best Batman ever (and rightfully so), but let’s not forget the job done by Aaron Eckhart, who by his performance gave this great movie it’s very soul.