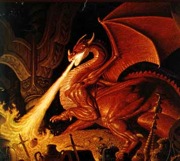 Another fantasy book series is about to make its way to the big screen. We get wind of the Dragonology adaptation from the gold hoarding caves of Yahoo:

The children’s book series “Dragonology” is headed for a feature version from Universal, which has acquired the film rights to the material and hired Leonard Hartman to write the adaptation. The faux-nonfiction books by Dugald A. Steer are based on the conceit that dragons exist, as revealed by the Victorian dragonologist Ernest Drake. An underlying theme is that dragons should be studied and revered in the same way as any rare species.

Screenwriter Hartman’s fantasy-adventure take on the material revolves around a group of dragonologists who go on a globetrotting quest to keep a corrupt man from taking control of the world’s dragons and using them to wipe out humanity.

I am all for dragons. If the villain is amassing an army of dragons to take over the earth, I think I will like him very much. This is the sort if inginuity you need if you are going to rule the globe. Using the power of dragonflame is as good a way as any to rule the world. Screw the atomic bomb, I’m glad Hitler didn’t have dragons! Nazi dragons certainty would have changed the course of history (although their outfits would have been bad ass.)

I haven’t read these books, so I beseech you international friends; if you have read this series, please share your thoughts with us. Is this a tale that will translate well to the silver screen, or should we expect more hunting for dragons than dragon warfare?

9 thoughts on “Dragonology The Movie”