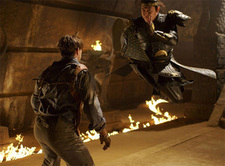 The third film has not yet even hit the big screen and there is already talks about a spin off movie following the grown up Alex O’Connor character played by Australian actor, Luke Ford.

Moviehole.net gives us this excerpt from an interview with Ford for ‘The Herald Sun’:

“There was talk at one point they might do a spin off series with Alex O’Connell depending on the success of this film”, said Ford, adding that “… they’re picking me up to be in the franchise, not necessarily taking over it. I’d definitely like to be part of that series if they ask me again”.

I hope that what the rumor is…..TALK. Does anybody at ‘Universal’ recall the colossal mess ‘The Mummy Returns’ spin-off, ‘The Scorpion King’ was?  That alone should have scared the studio to not even consider a spin-off!  Also, is anybody truly excited about the upcoming sequel anyways?

For years, I was probably the first one to campaign for another sequel, but without Rachel Weisz (how they thought Maria Bello would be a good re-cast is beyond me) or the incredibly good looking Oded Fehr as Ardeth Bay, this movie has lost all credibility to me.