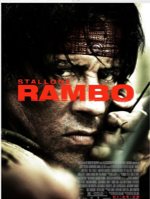 Thanks for checking out our Rambo review. To see a video version of this review, just go to the bottom of the post.

When I first caught word that Sylvester Stallone was going to be making a new Rocky and Rambo movies, I hung my head it total despair. To me, it was a sad desperate attempt by an aging former star to become relevant again. To me they seemed like horrible ideas. But then I saw Rocky Balboa (aka Rocky 6) and I had to seriously eat some of my words. It was such a great film, and one that I still think about. So who knows? If he could surprise the hell out of us with Rocky 6, maybe he can do it again with Rambo 4?

Rambo has spent his last few years living an isolated life in the jungles of Thailand, living alone and scraping out a living by capturing deadly snake for the local freak show. He’s quieter than ever and rarely speaks other than to say “fuck you” once or twice under his breath. One day however, his solitude is interrupted when a group of American christian missionaries confront him, looking for passage on his boat into the troubled country of Burma so they can deliver supplies and provide medical care to the refugees who are being terrorized by the local military. John J Rambo, being the wise man of the mountain that he is, tells them “no” and to go home. But one of the missionaries (the lone woman in the group) decides to appeal the what little humanity still exists in John and ultimately convinces him to help them. However, sometime after John drops the missionaries off in Burma, word comes out that the village they were helping has been attacked, and John is called on again to mount a rescue mission to save the missionaries now being held by the brutal military commander. This part may surprise you… but… violence ensues.

I know I usually start these reviews with “the good”, but this one has to be done in reverse order. I’ve got to say this right up front… the first half (or maybe closter to 5 8ths) of the film were horrible. If the movie had continued on the same way the entire beginning and most of the middle was going, an argument could be made that RAMBO deserves a place on the “top 20 worst films of all time” list. It was really that horrible.

Where Rocky successfully took a look into a familiar character we all know, dealing not only with a desire to complete again but also looking at life, the things that matter, reflecting on past victories and past defeats, dealing with the losses in his life that age and time bring and being forced to re-examine himself and who he is, all pushed along with brilliant dialog and meaningful exposition… Rambo fails at all of that. Reflection is replaced with AWFUL flash back montages of previous Rambo films, dialog is replaced by… well… nothing (and yes, I understand Rambo is quiet, I’m not suggesting a LOT of dialog… just make sure it’s decent when you use it the little that you do), pace is replaced with pause (just about nothing happens really) and story is replaced with just a premise. It was a snore-fest. Almost unwatchable… nay… it was unwatchable. Honestly, if it weren’t for the fact that we were in a special press screening, and surrounded by security guards, I think Doug and I would have walked out. Yeah… the first half of the film was really was that bad.

Special mention should be given to the dialog. Most of the talking in the film is done by the Christian Missionaries, and dear sweet heavens, was it ever BAD! Especially anything that came out of the sole female character’s mouth. Every time she spoke you wanted to jam popcorn in your ears to drown out the spew that was pouring forth. I honestly felt like they got all their dialog from Hallmark cards… read by Jessica Alba. It’s so hard to believe that this drivel was written by the same guy who brilliantly wrote Rocky Balboa.

As bad as the fist 2 acts are, the final 30-40 minutes equals in awesomeness. Rambo easily contains the most violence, war gory scenes I’ve ever witnessed in a film (and yes, I’m including the beach scene in “Saving Private Ryan” on that list). At one point, the action FINALLY starts… and from then on out, Rambo puts his boot to your throat and never takes it off. The crap just looks so frigging real, and it was so intense… and it was so violent… and he did such unspeakable things to a lot of these Burmeese soldiers… wow it was fun! I can’t stress this enough: If you’re going to see Rambo because you want to see good ol’ John J. kicking serious bad guy ass… then the last act of this movie will make you leave the theater with a huge smile on your face.

Some of the most intense action/violence I’ve ever seen in a movie, is almost ruined by every other conceivable thing being done wrong. The first half (and more) is some of the worst film making I’ve seen in years… and then suddenly out of nowhere it is redeemed by delivering exactly what the Rambo audience paid their money to see…. Rambo doing insane Rambo things… and doing them well. It was enough to save the movie for me. If you’re going to go see it, I’d say plan on being 20 minutes late, I promise you’re not missing anything and you’ll get to the good stuff faster! Overall I give Rambo a 5 out of 10 (first half a 1/10, the last a 9.5/10).

WATCH THE VIDEO VERSION OF THE REVIEW HERE: