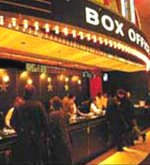 The attention and interest generated by the article I put up the other day on Why Commercials Before Movies Is Worse Than Piracy continues to generate a lot of discussion (and so the topic should). One of the recurring emails I’ve been getting from a lot of people is the question about why it costs so much to go to the movie theater(in light of the commercials and ad revenue the industry is making for itself), where does the money go and how do we make this stop?
Much of what I’m writing here now is a lot of paraphrasing from a chapter in my abandoned book project from a few years ago. But here’s the gist:

1) Who Gets What From Your $10 Ticket?
Ok, so you walk up to the box office and drop down your $10 to buy your ticket. Who gets that money? A lot of people assume (as did I at one point) that the movie theater keeps 50% of it, and the rest goes off to the studios. That’s not really true.

Most of the money that a theatre takes in from ticket sales goes back to the movie studio. The studio leases a movie to your local theater for a set period of time. In the first couple of weeks the film shows in the theatre, the theatre itself only gets to keep about 20% – 25% of the green. That means, if you showed up to watch Bridget Jones’ Diary on opening night, then of the $12 you put out for a ticket, the movie theatre only got to keep between $2.40 and $3.00 of it.

That’s not a lot of money, especially when you think about how much bigger and elaborate theatres are these days. It’s not cheap running one of these places. It can get even worse. This percentage will vary from movie to movie depending on the specifics of the individual leasing deal. For instance, 2 movie theatre managers told me that for Star Wars Episode II: Attack of the Clones, the studio took 100% of the box office take for the first week of release. Can you imagine that? They had to over staff and have above normal capacity flood into their theatres… and they got to keep $0.00 from the ticket sales. That almost seems criminal.

Now, as you move into the second and third weeks of release, the percentage starts to swing to anywhere from 45% – 55% that the theatre gets to keep. It gets better after the fourth week when theatres generally can keep up to 80% or better of the ticket sales. There is an obvious inherent problem with this arrangement. I don’t know about you, but when I finally get around to seeing a film that’s already been in the theatres for 4 or 5 weeks, I’m usually one of the only people in the place. It doesn’t do the establishment a lot of good to keep 80% of the ticket sales when only 14 tickets are sold per show. And with more and more and more movies getting released every week, the length of time that a movie stays in theaters is shrinking. Bad news for the movie theaters.

Movie theaters are then forced to really make their money off concessions. One theater manager said “We’re not in the movie business… we’re in the candy business”. Very true. So if you ever wondered why a $0.15 bag of popcorn is costing you $5, and a $0.08 cup of Coke is running you another $4… it’s because the economics of the industry system is so screwed up that the concession stand is where theaters have to make most of their money.

2) The Cost Of Making The Movies
With the cost of today’s movies getting higher and higher, the studios leverage their position with the theaters to squeeze more and more out of the arrangement mentioned in point #1. 10 years ago they weren’t paying Chris Tucker $25 million dollars for one movie… for 3 months work… a hack… CHRIS TUCKER… $25 million. Superman Returns did NOT need to cost $200 million to make. Spider-Man 3 did NOT need to cost $250 million to make. These numbers are astounding when you consider that just 7 years ago they would have called you mad. The pace of costs is far outpacing the requisite inflation… and there is really no excuse for it.

This is directly tied to how much you and I pay at the box office, and thus tied to why popcorn has to cost so much, and thus tied to why we see commercials. The higher the costs go for for making films, the higher my costs will be to enjoy a night at the theater. Sure, Transformers made tons of money… but the studios have to squeeze us for everything they can get to make up for their flops… their films that DON’T make money.

And people always wonder why I get so pissed off whenever I think about Chris Tucker getting $25 million. Because ultimately that money (at least in part) is coming out of my wallet.

3) The Organism of the Studio/Theater Relationship
To really make sense of all this, you have to step back and look at the Studios and the Theaters as one industry entity and view it from the perspective of how the parts work together to truly get a grasp on how big and out of control the problem is. You can’t just try to blame the Studios… nor can you just blame the Theaters. You have to look at them both (in this situation anyway) as one industry… how it functions… and ultimately how it affords its mistakes and inefficiencies at our expense.

The studios spend too much money making movies (and make too many movies), they squeeze as much box office revenue as they can from the Theaters thus forcing the theaters to charge us high ticket prices to make what little they can from each ticket, gouge us at the concession stand to make ends meet and show commercial after commercial after bloody commercial to pad some profit.

Do you see what happens? Look over #3 again. Ultimately, the studios don’t have to learn from their mistakes, theaters don’t have to manage themselves smarter… because as costs and losses and expenditure add up… they just keep passing off the bill to us. We pay for their mismanagement and spiraling costs. Why should they change anything or fix anything when they know that we’ll just get a cash advance in order to pay more to make up for their mistakes.

We pay for their mismanagement with our high ticket prices.

We pay for their mad decisions with $6 bags of popcorn

We pay for Chris Tucker’s $25 million paycheck with our time watching in-theater commercials.

All the while the industry continues happily along its downward spiral feeling no ill effects of their stupidity… because they’ve taken those ill effects and shoved them up our rectums for US to deal with.

4) The Solution Has To Start With The Theaters
If this insanity is ever going to stop… if change in the economics of going to the movies is going to ever happen, I’m convinced it will have to first start with the theaters. Movie theaters have to better organizes themselves and collectively stand up the the Studio system and REFUSE to let 80% of the box office dollar for a films first week of release go flying out the door to Hollywood. By not standing up collectively, the movie theaters act as complicit enablers to the studios behavior.

WHAT WOULD HAPPEN IF THEATER OWNER ASSOCIATIONS REFUSED TO GIVE ANY MORE THAN 50% OF OPENING WEEK BOX OFFICE MONEY TO THE STUDIOS? I’ll tell you what would happen:

a – Studios would be forced to SERIOUSLY look at their own economics and financial responsibility. There would be no more $25 million dollar pay days for B string actors

c – With added revenue from the actual box office, the pressure on theaters to add more ads, to raise ticket prices, to jack up popcorn costs… would be at least a little bit alleviated.

It has to be a collective effort by the theater owners or else the studios will just refuse to give their movies to the stubborn theaters and give all the business to others. If the Theater Owner associations collectively said “no”, the studios would have no choice but to start to fix their leaky boat

5) Why Not Going To The Theaters Won’t Fix The Problem
Some people will say “Well then let’s not go to the movie theaters until we force them to change”. That will NEVER work, because as I’ve demonstrated above, when there are financial losses, the current industry system just takes back those loses from those who are buying the tickets. They’ll blame piracy for the dip in thater attendance and raise prices even more. It’s a systemic problem.

And if you think you’re safe from these rises and gouges because you just watch movies at home on DVD…. guess where the systemic problem will strike next once they’ve bleed the theater goers as much as they possibly can? DVDs and HD discs will suddenly start costing $60 a shot and Hollywood will pressure Washington to pass tax laws on Big TVs to pay a fee to the studios for each unit sold, thus raising prices there too.

You see… the answer to all the current systems problems is to take more from us. Thus, the system itself has to change, the the theaters are the ones who have to start it.

Just some late night ramblings. Take it as you will.

(If you enjoyed this editorial, help spread The Movie Blog by giving it a DIGG, or using the “Share This” link below to spread it on other social formats like StumbleUpon)