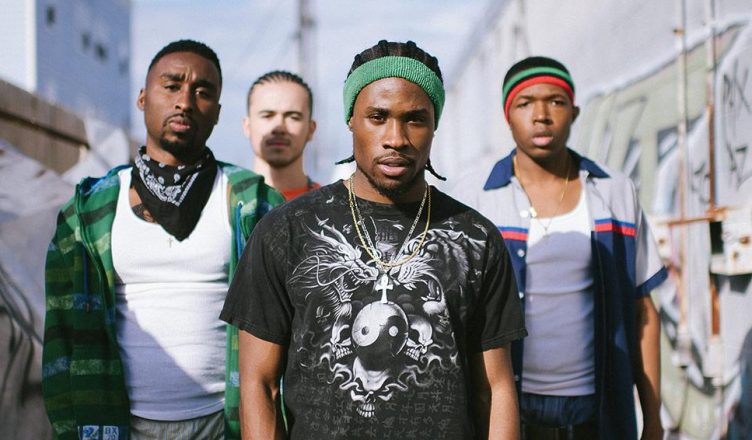 From director RZA and writer P.G. Cuschieri, comes the explosive CUT THROAT CITY, the story of four boyhood friends in New Orleans’ Lower Ninth Ward, who return after Hurricane Katrina to find their homes decimated, no jobs, and no help from FEMA. Out of options, they reluctantly turn to a local gangster, who offers them one shot at turning their situations around – by pulling off a dangerous heist in the heart of the city. When the job goes bad, the friends find themselves on the run, hunted by two relentless detectives and a neighborhood warlord who thinks they stole the heist money.

One thing that is undeniable about Cut Throat City is that it certainly has a stellar ensemble of talent. I thought Shameik Moore carried the role of the lead character, “Blink”, pretty well. His performance was convincing enough to have me believing in his character’s plight and mindset during some of the more stressful times in the film. Moore wasn’t alone as the veteran actors in supporting roles left their marks on the film too. Terrence Howard probably stood out the most with his curiously fearsome character of “The Saint”. I think what made his character work so well was how he was able to be both soft spoken but still ruthless at the same time. Then there’s Wesley Snipes who I thought brought an unexpected presence of humility through his character. I was a bit disappointed that his character’s relationship with “Blink” wasn’t further explored to bring a bit more complexity to the story at large. Next up, the thriller aspect in this film does deliver as advertised. During some of the heists or tense confrontations, you definitely can feel the sense of urgency whenever things get hot. I think one of the most nerve-racking moments came with the meeting with “The Saint”. You simply didn’t know where things were going to go or how the situation was going to develop. That sensation certainly keeps your attention to get you through each act of the film. Another positive is how Cut Throat City accomplished its goal of communicating the theme of aspiration becoming desperation. I appreciated how this film showcased a sense of balance that grounds the characters into having a believable situation. It was really important to show that the main characters weren’t just bad people doing bad things. Rather the Cut Throat City shows how good people end up doing bad things because of an even more messed up situation. Had this film not shown that the characters were left with little to no choices, then it would’ve made the film feel cheap. Thankfully, that wasn’t the case, and being able to see the individual family situations and more aided this film overall.

I think the biggest issue with Cut Throat City is how the story is told overall. It wasn’t the easiest thing to follow unfortunately. I think part of the reason for this was due to the lack of focus on the central character. We’re given the impression that the story has a singular focus on Blink with his friends and family. However, the movie then evolves into some wider scheme that doesn’t feel fully fleshed out. Random characters are introduced, and names are thrown around as if we’re supposed to connect the dots and know all of the relations. As a result, some characters felt inconsequential such the police officer “Lucidna”. Plus, the film’s ambiguous ending adds even more questions, and not in a good way. Without giving anything away, there’s a point in the film’s third act that tries to be open to interpretation. Usually, this would be a crafty way to really keep audiences invested in the film after the credits role. However, this “What if” scenario that we’re left with only seemed more confusing. Even after multiple watches, it simply didn’t add up. That leaves me to believe that the problem there may have been with the editing because it’s difficult to distinguish where the fork in the road occurs for the film. It’s totally fine for a filmmaker to give audiences a split decision within a story, but if we aren’t clearly informed that this or that moment is where the story diverges then the original goal won’t be accomplished. Lastly, I do think that the script conflicted with the direction of the film. As mentioned before, the story feels discombobulated in terms of where it wants to go. I think one of the distractions comes from the writing where it would appear that the film was more interested in preaching than it was to tell the story at hand. Mind you, there’s nothing wrong with a film using its characters to delivery some insight, observations, or even stinging criticisms. However, in Cut Throat City, I believe more time was devoted to doing that rather than having an authentic flow of conversation with the characters.

Cut Throat City is an ambitious film that seeks to humanize the plight of a forgotten situation that plagued the city of New Orleans after a traumatizing event. That in itself, makes this film have some real sense of value. The cast and talent are the biggest draws and heists are also compelling. The movie doesn’t really come together by the third act, and that’s where it may end up losing people. There are number of elements in this film that draw from different backgrounds and genres, but I just don’t think they all blended very well. This film didn’t resonate with me outside of the appeal to bring awareness to the tragic history of New Orleans. Beyond that, this wouldn’t be a strong recommendation from me, although I wouldn’t dissuade anyone from catching it on VOD either.