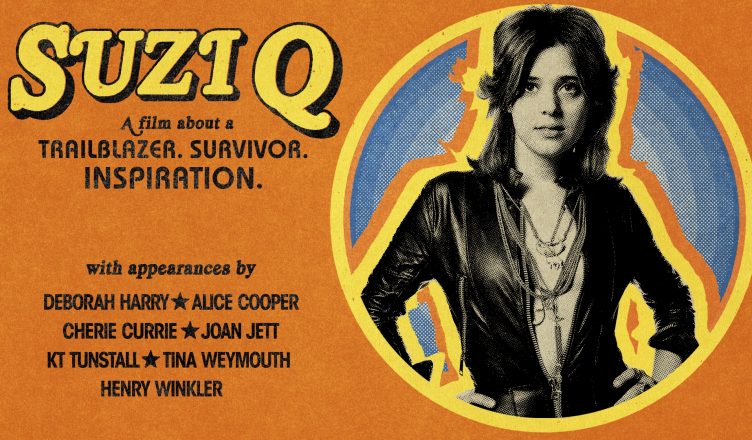 The official Suzi Quatro documentary feature SUZI Q, which charts the 54-year career of the pioneering female rocker who burst onto the scene in the 70s, is set to (hopefully) open in theaters July 1st and release on VOD and DVD with special bonus features on July 3rd, courtesy of Utopia. I watched it before the pandemic struck. I wonder, now, if the plans to release it in theaters represent yet another hurdle thrown in the way of one of rock and roll’s trailblazing female performers, who has had more than her share.

It’s a terrific documentary and very entertaining, with lots of archival footage from the Australian filmmakers. Suzi was, quite simply, ahead of her time and it hampered her success in her native land.

Once Suzi Quatro of Detroit City saw Elvis she knew she wanted to be him. In a way, she did become the female Elvis—just not in her own homeland. In the process, she had to overcome some family disapproval, causing her to say, “You’re gonna,’ at some point, pay serious dues.”

Suzi’s career was hampered when the man responsible for much of her promotional success, Mickie Most, a promoter who had discovered The Animals and the Yardbirds, quit guiding her career in 1980 upon the expiration of their contract. Mickey had urged her to come to England in 1971 when she was just 21 years old. She was the first female bass player to become a major rock star and the combination of the pint-sized power house playing the large bass guitar and singing as well as the men caught on in Europe and Australia, but not in the U.S. In the 1970s, Quatro scored a string of hit singles that found greater success in Europe and Australia than in her homeland. She reached Number One  in the UK and other European countries and Australia with  singles “Can the Can” (1973) and “Devil Gate Drive” (1974). Following a recurring role as bass player Leather Tuscadero on the popular American sitcom Happy Days, her duet “Stumblin’ In” with Smokie‘s lead singer Chris Norman reached No. 4 in the US.

Quatro released her self-titled debut album in 1973. Since then, she has released fifteen studio albums, ten compilation albums, and one live album. Her other solo hits include “48 Crash“, “Daytona Demon“, “The Wild One”, and “Your Mama Won’t Like Me.

Between 1973 and 1980, Quatro was awarded six Bravo Ottos. In 2010, she was voted into the Michigan Rock and Roll Legends online Hall of Fame. Quatro has sold over 50 million albums and continues to perform live, worldwide. Her most recent studio album was released in March of 2019 and she also continues to present new radio programs.

This excellent film from Australian filmmakers Liam Fermager (director) and Tait Brady explains, “Suzi was the precursor to Joan Jett.” You could say, “Suzi Quatro was Joan Jett before there WAS a Joan Jett.” That message is driven home by riveting rock & roll footage of Suzi in concert and by such fellow artists as  Alice Cooper, Deborah Harry (Blondie), Joan Jett, Cherie Currie (The Runaways), Tina Weymouth (Talking Heads), Donita Sparks (L7), Henry Winkler (Happy Days), Kathy Valentine (The GoGo’s), KT Tunstall, members of the Quatro family, and many more.

“Suzi Q” portrays Suzi as the trailblazer and inspiration for a generation of women musicians to follow.  As the film says, “It takes a Suzi Quatro to come along and say, to other girls, this is possible.” Suzi is quoted this way: “I was waiting for my shot…As soon as you make it big, they cut you to pieces.  At that time, rock was a male-dominated business.” She also notes, of her work ethic, “I’m obligated to be the best I can be. That’s the attitude I take to my shows.  You’re gonna’ get all of me.”

“Suzi Q,” the documentary, is the story of the girl from Detroit City who redefined the role and image of women in rock & roll. She broke through around the world in 1973 and sold 55 million records in a 54-year career. She is singer, songwriter, bass player, author, radio presenter, poet, actress and she is still touring and recording music, with a new album, “No Control,” her 24th album. (March, 2019). Quatro moved to England in 1971, after being spotted by the record producer Mickie Most, who had by that time founded his own label, Rak Records. He had been persuaded to see Cradle—the group that included Suzi and 2 of her sisters— by Michael, the Quatro sisters’ brother, who had assumed a managerial role. Like many in the record industry at the time, Most was seeking a female rock singer who could fill the void that the death of Janis Joplin had created. According to the Encyclopedia of Popular Music, his attention to Quatro was drawn by “her comeliness and skills as bass guitarist, singer and chief show-off in Cradle.”

When Mickey Most saw Suzi and her sisters—Patti, Arlene and Nancy—playing and singing, he only wanted Suzi, the cute, petite bass player. That set the family unit on a path of jealous envy. Suzi, herself, says, “You can always look back with regret…It’s important to be validated by the ones you love the most….But when you look at what you have accomplished, you have to realize that the mistake is that people overlooked you. That’s their mistake.”. Suzi’s look—leather cat-suit—was modeled on the Jane Fonda film “Barbarella” and she had to leave the country she grew up in to make it. Make it she did, but having your record be #1 in Portugal, France, the UK and Switzerland is not the same as making it in the United States. Her self-titled album, although Number One in Australia, only made it to #142 in the U.S. Today, she lives in Essex, Hamburg (Germany, a country which embraced her), and, sometimes, in Detroit.

In 1974 Suzi came back to tour America, not having been back in 3 years. Upon returning home, she discovered that all of her clothes and albums in her childhood home had been removed. She played 65 cities in 72 days and opened for Uriah Heep and Alice Cooper on the Welcome to My Neighborhood tour (April 4, 1978). She even made the cover of “Rolling Stone” (Issue #177). But even Clive Davis couldn’t get Suzi’s songs played in the U.S. on radio and, as Joan Jett says in the documentary, “The key to success in the states has always been radio.”

After the Alice Cooper tour of 1974, there was no real push for Suzi’s music and “Stumblin’ In”, which went to #4 in the U.S., was her highest-charting song in her home country.

Suzi spent 3 years (1977-1979) on “Happy Days” as Leather Tuscadero, playing the younger sister of Fonzi’s girlfriend Pinky Tuscadero.  She was even offered a spin-off series by Garry Marshall, the series creator, but turned it down for fear of being typecast. In 1980, following the end of her contract with Mickie Most, who had discovered her and nurtured her career to that point, she signed with Chapman’s Dreamland Records. Dreamland Records folded in 1981, leaving Suzi without a record label.

Suzi had fallen in love with her back-up guitarist, Len Tuckey, with whom she frequently co-wrote songs. They were married in 1976, at which point Quatro had spent 5 years abroad.  Suzi spent 5 years after their marriage trying to have a child. She succeeded, giving birth to a daughter, Laura, in 1982. Her son, Richard Leonard Tuckey, was born in 1984, and he plays with her today.

Suzi and Len divorced in 1992, after 16 years of marriage. Lenny objected to Suzi’s taking a role in a 1986 production of “Annie Get Your Gun” playing Annie Oakley, saying, “You can’t do that and then sell rock and roll in the United Kingdom.” He added, “She didn’t want anybody holding her back.” Today, Suzi is married to German record producer Rainer Haas, whom she married in 1993 and resides in Hamburg, Germany, or in Essex, UK.

SUZI Q, the documentary, positions Suzi as the trailblazer and inspiration for a generation of women who were to follow after her in the next decade, but whose  trailblazing status was not sufficiently recognized by the music industry and contemporary audiences in North America.The documentary SUZI Q reminds contemporary audiences of her pioneering influence, white-hot talent and string of incandescent rock hits (CAN THE CAN, 48 CRASH and DAYTONA DEMON) that were the vehicle for her explosion of gender stereotypes in rock n roll. She rewrote the rule book for the expected image of women in rock music and reached millions of people worldwide in the process.