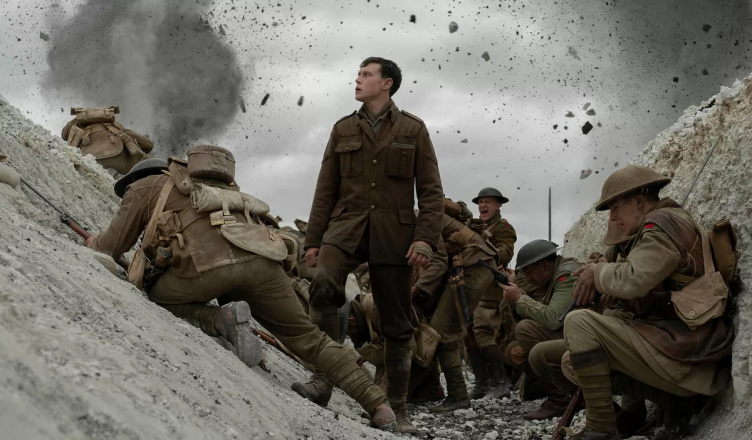 At the height of the First World War, two young British soldiers, Schofield (Captain Fantastic’s George MacKay) and Blake (Game of Thrones’ Dean-Charles Chapman) are given a seemingly impossible mission. In a race against time, they must cross enemy territory and deliver a message that will stop a deadly attack on hundreds of soldiers—Blake’s own brother among them.

The most compelling aspect of this film will come from the long takes in how the film was shot. If you ever wanted to get a good understanding of what fantastic cinematography looks like, then look no further than Roger Deakins’ work on 1917. While it may seem like a gimmick, it’s certainly still fascinating to see how this film was able to capture so many extended shots and combine them into the appearance of one continuous take.  As the movie progresses, it was a treat to constantly wonder “how did they manage to shoot all of this” with all of the actors performing without skipping a beat. The way this film was shot will make you feel as though you’re lock step with the two main characters. The various camera angles also enhanced the viewing experience from beginning to end.

The continuous shot element really bolstered the storytelling and made the plot far more compelling. From the very start of the film, it doesn’t take long for the sense of urgency to become clear, and you really get a sense of how important the mission at hand can be. Furthermore, as we follow along with the main characters, we get a front row seat of some really intense action sequences that keep you on the edge of your seat. It was so well done that you’ll probably feel like you’re fighting in the war right there in the battlefield. Plus, when the war-time battle scenes are all done, the emotional impact of some of the story elements really land hard. Since we’re following the main characters so closely, you can’t help but to relate to their joys and pains along the way. By dealing with the realities of war, the story really manages to feel complete in every way.

From the leading and supporting roles, the acting in this film definitely deserves some credit. Both Dean-Charles Chapman and George MacKay delivered solid performances. What made both of their performances so effective was how they were able to emit a full range of emotions throughout the story. When they were terrified or happy, you could definitely empathize with their state of being at the moment. One performance that hit me the most, although the role was very brief, came from Richard Madden’s character, “Lieutenant Blake”. His one scene,  hit me directly in the feels, and it may cause a bit of eyeball leakage for others too. If there was a minor issue with 1917, I’d say that the dialogue wasn’t very strong at times. I thought it worked fairly well between Chapman and MacKay, but other times the dialogue just felt like a filler until the next big dramatic sequence was going to take place. It didn’t seem as though some of the dialogue added very much to either the story or setting. For example, during the scene where we meet another group of soldiers that are traveling on a different mission, we hear them tell different stories and such. I don’t think it really helped in giving the audience the full weight of the times during the war, or helped in the main character’s development or journey. Either way, it wasn’t a deal breaker, and probably not something that will bother most people.

It’s safe to say that 1917 is a phenomenal technical display of a captivating war-time drama. If you only need one reason to see this movie, it would be the long extended takes that appear to be in one shot. It’s visually enthralling, and the film is sure to keep you engaged all the way through. There’s no question that 1917 is very deserving to be seen on the big screen. I’d also wager that 1917 will be a fine contender for a number of awards (especially in the cinematography category). I’ll admit that I was initially uninterested in watching 1917, mainly because war themed films don’t always particularly interest me. However, when I heard that 1917 was shot in one take, my interest piqued. After coming out of the movie, I was beyond satisfied with how amazing of a ride the film put me through. It most definitely exceeded my expectations, and if you were on the fence about seeing it, consider this your positive nudge in the right direction.