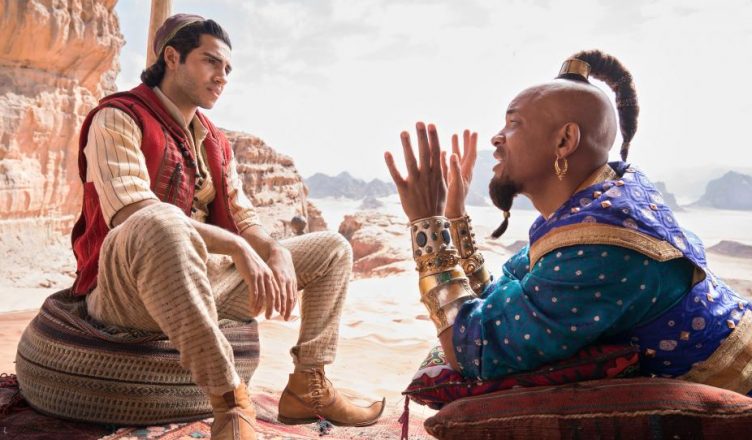 A thrilling and vibrant live-action adaptation of Disney’s 1992 classic, “Aladdin” is the exciting tale of the charming street rat Aladdin, the courageous and self-determined Princess Jasmine and the Genie who may be the key to their future. Aladdin stars Will Smith,  Will Smith, Mena Massoud, Naomi Scott, and more. Well let’s start off with the strongest factor in this movie, and that came from the some of the cast.  Naomi Scott as Princess Jasmine played her role in a very convincing way. Even if she didn’t completely lock down the cartoon character’s resemblance, Scott definitely brought to screen the commanding presence of royalty. I thought her performance was among the strongest of the entire cast next to Will Smith. If there were any concerns that Smith was going to do a disservice to the famous Robin Williams role then those concerns can be laid to rest. Smith was able to find a way to not only channel inspiration from Robin Williams’ version of the genie, but Smith was also able to make the role his own. It was similar to how Heath Ledger was able to channel Jack Nicholson’s Joker, while still being able to make it his own. (And no, I’m not comparing the levels of talent, nor am I saying that Will Smith’s genie was on par with Heath Ledger’s Joker.) Smith’s jokes, antics, and side commentary were definitely the funniest moments in the movie. Surprisingly, all of the “magic” in the movie also helped to propel his character.

The special effects in the movie were pretty good for the most part. The additional visual effects made this live action adaptation look more familiar to the cartoon. As I mentioned earlier, it supported Will Smith’s genie because the magic and illusions were a big reason why the animated genie so much fun.

In addition to that, the CGI special effects made the overall setting of the film really stand out. The shooting locations and set designs were done in a way that really immerse you into the world. I also appreciated many of the culturally influenced dance sets that were done during the film. The bright costume designs and dancing made for some really captivating moments in the film.

When it comes to the plot, it was nice to see the film mimic many of the exact scenes from the original cartoon. Despite that, Aladdin still managed to include some additional scenes and story that wasn’t in the original. I think the new additions to the story worked mainly because they were really subtle add-ins. The main plot points of the story are consistent and continue to play on the nostalgic factor.  I also think it’s fair to say that the musical songs were mostly executed well enough to make you want to sing along if you’re a fan. It took a moment to mentally adjust to the fact that the performers singing aren’t exactly the way people may remember, but nevertheless it worked. Sadly, Aladdin’s weakest points came from both the co-star and the villain. I wanted to care more about Aladdin’s character (played by Mena Massoud) but the performance just didn’t come off to be very strong. As a matter of fact, it was a bit forgettable, especially if we take away the musical sets. It’s just unfortunate because he is supposed to be the lead, or at least co-lead to Jasmine’s character, and his performance simply wasn’t engaging. I don’t want to give the impression that he was terrible though. There just weren’t any standout moments that would make you really empathize or care for character as one would hope for with any lead role. Now if we do want to talk about bad acting, then we need to look at the villain of the movie, Jafar, played by Marwan Kenzari. I think the whole character was a fail from the script to the performance. Since most of the movie tries really hard to stay true to the original cartoon, Jafar’s role felt the most far off.  While in the cartoon we know Jafar to be conniving, devious, and even charismatic, Kenzari’s Jafar didn’t exhibit any of those traits in the movie. Instead, he was over acting as if this was a straight to DVD…no, a one-night TV special movie that aired on the Disney channel at 3am in the morning. I was so disappointed in how he made Jafar appear to be a stereotypical, nonsensical, mustache twirling villain. I don’t want to place all the blame on only Kenzari because I’m sure he could’ve been capable of better. However, it would seem that the script and even the direction should share in the blame for that poor adaption of the villain as well. Lastly, there’s a particular scene with Jasmine that I think went a bit too far with its message of female empowerment. The scene I’m referring to is a music number by Jasmine called “Speechless”. Now, to be clear, there’s obviously nothing wrong with having a movie or piece of art convey whatever message the creators wish to convey. That is the film’s prerogative regardless of how people may feel about it. This is also not a criticism against female empowerment messages either.  Nevertheless, the issue with this scene is that I believe it was rather disruptive to the flow of the movie. Not only was it a new addition to the original plot, but it felt shoehorned into the story rather than allowing the same message to be communicated in an organic fashion. (Which I believe the movie was already doing quite well.)

Aladdin is a family fun film that has just enough magic to entertain fans of the original despite a few flaws. I get the impression that Aladdin will work for audiences who haven’t seen the 1992 animated film. I also believe that if Will Smith wasn’t in this movie to keep interest levels high, this movie would fall completely flat. The real key in enjoying Aladdin is to temper expectations for this movie to be equal or better than the animated movie. Either way, feel free to check out Aladdin in theaters.