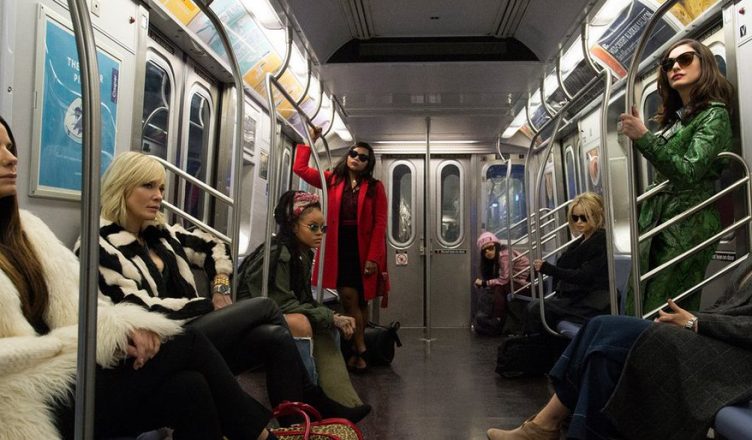 Oceans 8 due to release this summer June 8th in the US, is the latest reboot attempt with an all-female cast. Let’s hope this one can avoid the “controversy” surrounding a certain other movie  franchise that tried to go this route, you all know which one I’m talking about. Unlike the setting for Oceans 11 that took place in and around Casino’s in Las Vegas, where you can win it big much like at www.slotscasinos.ca.

This heist will center around the Met Gala in New York, where the target is a necklace worth $150 million. As this takes place at the met gala we also have a large cameo cast list including people such as Kim Kardashian, Kylie Jenner, Katie Holms and Zayn Malik.

This time around rather than following Clooney and his crew we are treated to a tale involving his sister Debbie, portrayed by non-other than the talented Sandra Bullock. Debbie just out of prison does what seemingly any Ocean would do and that is to put together a rag tag gang of lovable criminals in order to pull of an intricate heist. While Debbie has been doing time her old friends have moved on but she is determined to bring them back for a final score type job.

Check out the trailer below.

Now I can’t say that I’m itching to see this movie, in my opinion the Ocean movies just got progressively worse and is shifting the focus just slightly enough to invigorate this franchise?

That being said at the helm we got Gary Ross (The Hunger Games, Pleasantville) and alongside Sandra Bullock we got Cate Blanchett, Anne Hathaway, Dakota Fanning, Helena Bonham Carter and even Rihanna just to name a few familiar faces.

And out of the original Clooney crew we have Matt Damon reprising his role as Linus Caldwell and Carl Reiner appearing as Saul Bloom. The cast list also features a large cameo cast list including people such as Kim Kardashian, Kylie Jenner, Katie Holms and Zayn Malik.

Warner Brothers clearly have high hopes for this movie to be one of their summer block busters, and it does have all the ingredients. We got some cameos from celebrities; we got a frankly quite impressive cast, the seasoned director. Hell we even got Matt Damon for everyone to go “oh hes playing that guy from the trilogy ooooh aaaah” about or you can just play casino games at seriöse online casinos auf einen blick

Oh and I guess Clooney’s character is dead?

A spine-tingling horror film is coming this Halloween! Check out the trailer of “Come Play”!

“Honest Thief” Trailer Debut: So if you liked Liam Neeson in the “Taken” Franchise…Boy, are YOU in Luck!