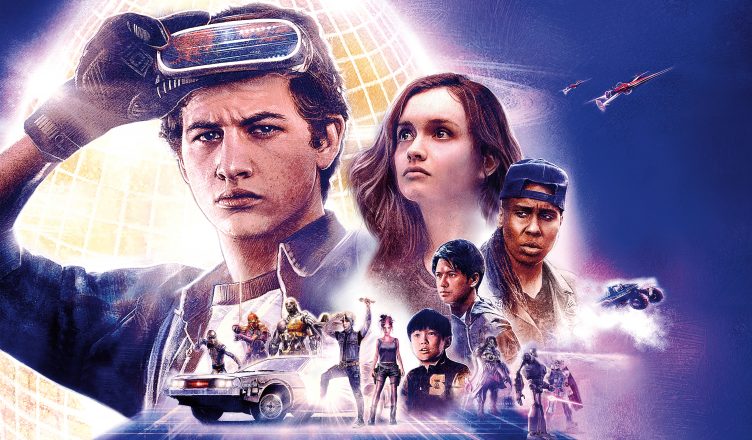 Ready Player One is Steven Spielberg’s latest film starring Tye Sheridan, Olivia Cooke, and Ben Mendelsohn. The world famous creator of the virtual reality world, called OASIS, passes away. However, before his death, he released a video issuing a challenge to the world to find his Easter Egg. Whoever is able to find it will inherit his entire fortune.

First and foremost, the cameos and pop cultural references are the biggest draw for this film. In one way, the pop culture references will be coming from so many angles that you’re bound to connect and recognize some of them. Now if you happen to recognize most of the callbacks and references, then you’ll totally geek out (like I did).  Although a good portion of the movie utilized a lot of CGI effects, it felt completely authentic. Everything is so thrilling to see that, it really makes it hard to take your eyes off the screen.

I think one of the added bonuses to the captivating imagery was just how much it amplified the plot of the story. The setting and plot go hand in hand when it comes to the world building aspect of this movie. What I appreciated the most with the writing was that it didn’t take some of these sci-fi concepts and go overboard with them. I think some of that was accomplished by depicting the the duality of the “real world” and the virtual world. Showing how the people interacted with both really helped this film firmly establish a much more practical feel. Anyone who’s even remotely familiar with any video game or movie can comprehend and connect with Ready Player One.

I was content with the fact that there was a nice amount of humor in the film. Ready Player One rarely exerts itself to go beyond its comedic limit. One of the most memorable scenes of the film may come towards the end in the final act. I thought Ready Player One‘s big climatic scene was a culmination of action, humor, thrills and suspense.

I thought overall the characters did a fine job within their roles. Tye Sheridan (who plays “Wade”) really captured the essence of being a pure fan who happened to be a bit of a geek. Hannah John-Kamen caught me off guard with her solid performance as a villain. Also, I personally think that Win Morisaki (plays “Daito”) was a great scene stealer, even if it were just for a moment.

The only knocks against this film I could see are minor, but still worth noting. For as great as the pop culture references may be, the movie does rely heavily on the nostalgia 80’s vibe.  So much so, that the actual story itself is kind of thin. If we really want to get nit picky, one concept in the story kind of stuck out to me. I understand that this takes place in a near future world and all of that. I just don’t understand how the concept of “catfishing” can surprise a person living in that virtual world. Lastly, I thought the major villain was a little too cheesy. Don’t me wrong, the villain does fit the mold of a “video game villain”. That is to say, the bad guy in this movie is pretty bland and generic. I thought it was a missed opportunity to make the antagonist elevate a more realistic evil presence to contrast the virtual fantasy that the rest of the world tries to uphold.

Ready Player One is a visual roller coaster ride for your eyeballs. I think it’s the type of movie that every video gamer would dream of seeing. Thankfully, you don’t even have to be a video game lover to enjoy this film. Ready Player One is one of those movies that feels niche, but anyone can be thoroughly entertained by it. I should mention that I viewed this movie without having read the book it was based on. The majority of people I’ve spoken to who have read the book say that this film does preserve the heart of the book, while some details are obviously changed for movie goers. So don’t bank on a 100% book adaptation.

This is usually the time when I would give you a sense of what this movie is like by comparing it to other movies. Well, since there are so many various pop culture references to other movies within Ready Player One, I don’t have time to make a top 100 list. Instead, my only recommendation would be to go watch The Shining (1980) if you have never seen it, or if you simply don’t recall it. You’ll appreciate some things in the film more if you do.

Anyway, Ready Player One is a no-brainer, must-see in theaters. It’s such a fun movie that you’ll probably want to see it again.  If you can, I’d highly recommend seeing it in Dolby Atmos. One thought on “Review: Ready Player One Is An Adventure Ride For Your Eyeballs”