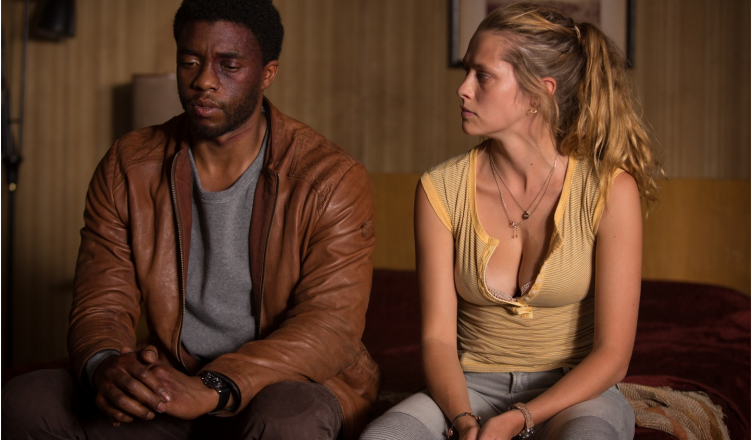 A message from the King is a sad story. Not just in the writing, but also with the lack of promotion! I found the movie in my Netflix list the other day and I don’t remember adding this movie. I don’t know if id heard of this movie before. I never got a press release about it from Netflix and the film doesn’t have an official site. there’s no Facebook page or social media presence whatsoever. really really strange that such a film with star power goes without any promotion whatsoever. I bet the guys over at ToteSport reviews had the odds on this happening.

The film starts up well enough giving us a familiar setup. A Message from the King opens with Jacob King arriving in America and being interrogated about his arrival.  I felt Message from the King borrowed heavily from other films. This particular scene reminded me of Al Pacino in Scarface and his arrival in Miami. I hope this is intentional because I felt it was a nice homage if anything. Jacob King is looking for his sister who moved to America with her Husband. The setup is paper thin and Message from the King doesn’t waste too much time before we see the many facets of Jacob. There’s a mystery to uncover because Jacob’s sister has gone missing. Jacob’s approach to the mystery is where we peel back the layers of his character and boy do we learn a lot! Jacob is a reserved man who thinks carefully before speaking and is tactical in his approach with others.

Message from the King is pretty great all around and has some great performances from the actors involved. Alfred Molina does a great job as a Hollywood snob. Boseman uses the same accent, and characteristics, he uses as his Marvel character Black Panther. Teresa Palmer is incredible to watch in every scene. In fact, Palmer made a habit of scene stealing whenever she’s on screen. I really enjoy watching her character as she develops a cute nightingale attraction to Jacob. Luke Evans was a beast addition to this film and I feel Evans plays “the villain” so well that he could do this in his sleep.Tom Felton has done what few other Harry Potter alums have done. He’s outgrown the shadow of Potter. He’s not Malfoy but he is an asshole and he plays one remarkably well.

The film was pretty immersive. I couldn’t tell if it was the camera shots,  the “worn down” look of the characters, the saddening subject matter or all of the above. Message from the King  does an incredible job of bringing the viewer into this world. There are sprinkles of details that the movie seem more authentic and more than a little dangerous. The grocery store owners, the hookers, the mob that run a carwash… there’s an urban grit to this movie that stands out really well. If I had to compare the dreariness to another movie I would say that the tone of the world reminded me of 8 mile. As someone who reads about film all day I will admit one nitpick that isn’t fair to the movie. I hate when actors seem to be allowed to just walk on set as they are and make the movie. Boseman uses his normal everyday haircut in Message from the King and I noticed it. I’ve seen Boseman switch it up for other films so this makes me question production time. I noticed the same Luke Evans so I imagine these guys were only on set for a short amount of time and wouldn’t change up their look. This doesn’t take away from the movie and I admit that it’s not a fair criticism, I’m just weird about things like that.

Human trafficking, prostitution and the subject matter in this film are scarily believable but something I found confounding was the lack of any presence from the authorities. I mean the police do pop up in this movie but rarely in response to some of the incidents that should catch their attention. You know that feeling when you’re so into a movie that you worry about whats gonna happen next for the characters? I kept saying to myself  “Man, if they do that the police are gonna show up”. The Police did not show up. There’s a lot of crime in this movie. No fucks given. The pacing was a little too fast and i want more time into character development.  Message from the King is seemingly in a rush to get into the story that it barely offers development before getting  into the revenge story. I barely know about Jacob’s sister  but her character is the motivation for Jacob. Since I didn’t know or care about her I found myself agreeing with the  characters that told Jacob to just go home and chalk it up as a loss. This is an imbalance that doesn’t fully get addressed throughout the runtime. There are moments when Jacob is developed, and a few others, but I want more! These characters seem pretty cool and I just don’t know enough about them to fully care.

Jacob King is invincible. Jacob is a movie guy who takes ass whoopings and heals up somewhat quickly. There are few fights in this movie and but I felt like the hits that are taken should have put someone in a hospital by now. I can forgive this with pure action movies like the Expendables but this is a much more grounded movie than that. Some of those whoopings should break a bone but don’t.

I  really enjoyed watching Message from the King, more than I expected, despite the flaws.  There are some really great performances in Message from the King great acting with some slight disappointment in Boseman. I felt he essentially just used his character from Black Panther and ran with it rather than developing something more unique.

Message from the King is perverted. The movie made me a little uneasy with regard to the subject matter and had me worried for some of the character. (Where is that little boy!? he just ran off! He’s fucked). Not everyone gets a happy ending when the credits roll and there’s an incessant tone of dreariness in Message from the King.  I don’t often watch movies that make you feel that there’s no hope and still manage to keep my interest. Message from the King opens with Jacob getting questioned upon arriving in America. In hindsight I know that Jacob knew damn well there’s a good chance that he’ll never go home.

Message from the King is a fun watch and i’m definitely going to give it a re-watch. Fabrice Du Welz is a talented director and is truly ‘radar’ worthy.

5 thoughts on “A Message from the King is heartbreaking”