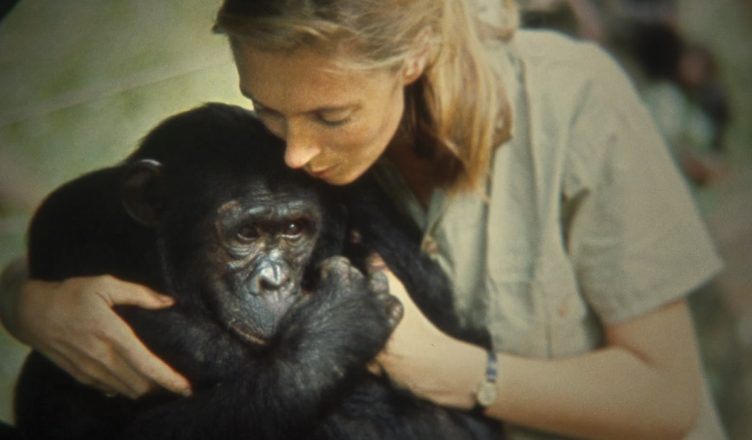 When  I taught 7th and 8th grade Language Arts, I always showed the students the documentary (16 mm. film rented from the local library) “Miss Goodall and the Wild Chimpanzees.” Imagine my excitement at learning that Director Brett Morgen (“The Kid Stays In the Picture” (2002); “The Chicago Ten,” (2007); “Cobain:  Montage of Heck” (2015)) had unearthed a vast treasure trove of National Geographic film shot by Jane Goodall’s husband, Hugo Van Lewick, long considered one of the most accomplished photographers of wild life.

Jane Goodall was Louis Leakey’s 26-year-old British secretary when Leakey selected her to go to Gombe in 1957 and study chimpanzees. She had no formal higher education, as her parents were not wealthy enough to afford university, but she had an abundance of patience, an open scientifically inclined mind, and a life-long love of animals. She had a desire to get close to wildlife. Jane’s father left for the war when she was five, and her mother was very supportive of her daughter’s unorthodox aims.

Said Jane, “I wanted to do things that men did and women didn’t. I wanted to come as close to talking to animals as I could. I had dreamt of going to Africa ever since the age of 8 or 9.  I felt that this was where I was meant to be.  I had no idea what I was going to do, but I wanted to be able to move among them…And so began one of the most exciting periods of my life: the time of discovery.”

Through Jane’s extensive documentation and Hugo’s photographic record (he arrived September 1,1962, funded by National Geographic), we learn that it took almost 5 months in Gombe before the chimpanzees began to accept Jane Goodall.  Jane began naming the chimps (David Graybeard, Goliath, Mr. McGregor, Flo and her baby Fifi and, eventually, Flint) and the chimps began to actually come into the tents to steal bananas. In fact, ultimately a system had to be put in place to keep the chimpanzees from stampeding the place in search of any manner of goods to carry off. Jane comments: “Staring into the eyes of a chimpanzee, I saw a thinking, reasoning personality looking back..How like us in so many ways.”

Both Jane and Hugo found it “absolutely thrilling to have the chimps so close.” Jane writes, “What an amazing privilege to be accepted by a wild, free animal.” Hugo’s funding from National Geographic (which contributed most of the film used, but without much organization or color, as the director confided, both of which he had to provide) ran out and Hugo left, moving to the Serengetti Plain to photograph all manner of animals. A telegram arrived for Jane that said, “Will you marry me? Stop. Hugo.”

And so the woman who had given little thought to marriage or having a family did marry Hugo and the newspapers of the day had a field day with headlines like: “Me Hugo, You Jane.” “Jungle Relationship Leads to Altar.” “Eat Your Heart Out, Fay Wray,” and “Beauty and Her Beasts.”

Soon, the couple had a son, whom they called Grub. As Jane recounted the couple’s partnership, she said, “You got married. You got pregnant and you had a baby.” Jane dedicated herself to raising their son for the first three years, and commented that, “There is no doubt that my observations of the chimpanzees helped me to be a better mother.” She commented that she “understood the mother/child bond better” after giving birth. However, she also soon found that she couldn’t both raise a child and study the chimps.

Jack Parr (better known as the early host of the “Tonight” show) came to interview Grub and we learn that Grub had to be locked In a sort of grandiose enclosure or cage, as chimpanzees have been known to eat other small primates.  At the age of six, Grub was sent back to England for schooling and, after a period spent working as Hugo’s assistant on the Serengetti Plain, Jane returned to Gombe, visiting her son who was being raised by Jane’s mother (his grandmother) on holidays in England.

When Jane returned to Gombe, however, tragedy struck. The chimps had been struck by a polio epidemic and many of them died or were crippled. McGregor had to be shot, and Jane comes down definitively on the side of euthanasia, saying, “I see no difference between helping an animal and helping a human.  The epidemic didn’t start with us, but it was tragic.” A rule was made that students studying the chimps could no longer touch them.

Flo, the dominant female amongst the group, had a daughter, Fifi. Then came Flint and the opportunity to observe a baby chimpanzee grow to adulthood in the wild presented itself. The observations so far had already proven that chimps were capable of making tools (in this case, long sticks used to lure ants from logs). Now more funding could be garnered to study a baby chimp that would grow to adulthood while being observed.

However, Jane’s own marriage to Hugo was faltering, impacted by their differing circumstances and the distance between them, and ended in divorce (Hugo died in 2002). Hugo’s letter to Jane spelled out the conditions of marriage as he saw it: “The woman is to be a compliment to the man in all things.” Let’s just say that Jane Goodall did not completely buy into that philosophy. The pair went their separate ways, while remaining friends.

Grub, their son, now lives in Dar Es Salaam, where he builds boats.

Filmmaker Brett Morgen, who appeared after the showing for a Q&A. announced that the film will be showing in Chicago by Friday, October 26. He was asked how he got the film and responded:  “I received a call from National Geographic about this lost film. But there were no 2 consecutive shots. We had to construct the narrative. That was 2 and ½ years ago.  The film was also totally silent, so we had to add sound editing in the office. There was a massive library of chimp vocalizations and we arranged for all the footage to move to the music. We also put in 225 hours of hand painting to make the film resemble the vibrant forest that Jane described, as it was sort of brown when it was found. There were very few scratches on the film. Every shot is Hugo’s. There is no stock footage.  Hugo was a total neophyte when he went to Gombe, but these two people defined and redefined their vocations.”

In response to questions from the audience, Morgen said, “It was also kind of empowering that Jane didn’t’ have to give up her dream for a man.  It is a very refreshing message for boys and young men and is of equal or greater value for young boys. Kids: follow your dreams! The message for parents comes from Jane’s strong mother: she listened and accepted Jane for who she is and allowed her to be heard and identified.”

When asked about interviewing others who might know Goodall (now in her eighties) Morgen said, “I don’t do the broad interview approach where you interview anyone and everyone.  Jane was enough.”

This is a truly outstanding look at the work of two pioneering students of animal behavior and the landscapes and photography of wildlife in Africa are beautifully done, with a score by composer Philip Glass. Although there were moments when the soaring crescendos of Glass’ music became almost intrusive, the film as it was originally found (silent and brown) was vastly improved by the addition of the animal sounds and the voice of Jane, herself, reading from some of her books, including “Reason for Hope.” I learned so much that I had not known about this truly remarkable woman and one of her observations late in the film, when her chimpanzees became aggressive and violent, was sad: “I had no idea of their (the chimpanzees) brutality. I thought that was just humans, but now I think it is deeply embedded in our genes.”

As Director Brett Morgen said, “Jane Goodall is an author, first and foremost, and also a good speaker.” He mentioned “Reason for Hope” and talked of the poetry and lyricism of her writing. She has devoted her life to trying to help preserve the wild chimpanzees, moving around the globe with her message and never spending more than 3 weeks in any one place since leaving Gombe. She has said of Morgan’s film that it is “the only one that has captured Gombe” and her favorite of all previous films made about her work.