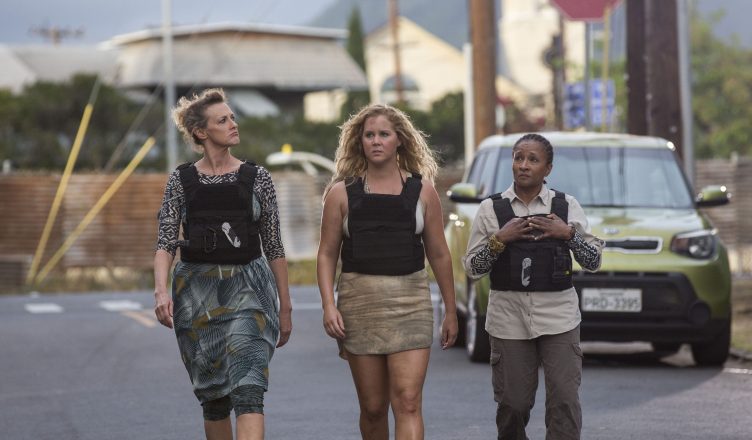 “Snatched” is a film about a mother/daughter vacationing pair who are kidnapped while on the daughter’s non-refundable vacation (“Let’s put the FUN back in non-refundable!” says Amy in trying to convince Goldie to accompany her).

Emily Middleton (Amy Schumer) has been dumped by her boyfriend (Randall Park as Michael) in a restaurant scene that the row of middle-aged women behind me found laugh-out-loud hilarious. I have to admit: it was pretty funny ( it’s been featured in various trailers on television). The mother in this equation is 71-year-old Goldie Hawn, an Oscar-winning comedienne whose presence in the film brought in the older crowd. Goldie is living her life very cautiously, having raised Schumer and her onscreen brother Jeffrey (Ike Barinholtz) as a single Mom after Mr. Middleton walked out on the family. Linda Middleton (Goldie Hawn) is fixated on cats and spends the evening checking the locks on her home, as she is convinced that the world is a very dangerous place. Son Jeffrey also has issues (agoraphobia) and only Emily (Amy Schumer) seems to be a free spirit who goes for adventure like a heat-seeking missile.

When Amy’s band member boyfriend shines her on, she is stuck with a trip to Puerto Cayo, Ecuador and no one to take it with. Ultimately, Emily asks Mom Linda to go with her, even though, while on the trip, Mom emerges from her hotel room swathed in multiple layers of clothing, causing Amy/Emily to say, “You look like a beekeeper.” I smiled, as I have a friend who will not expose her aging skin to sunlight, even when in Cancun for two weeks. And—let’s face it—inviting Mom to accompany her is better than leaving Linda/Goldie at home reading a book entitled “How to Cheer Up a Depressed Cat.” Goldie Hawn has not been in a film since 2002’s “The Banger Sisters” but her comic timing is just as sharp as ever, and she looks great for her age, as anyone who has seen her at various awards shows will  know. Now, Goldie has become BFF with rising star comedienne Amy Schumer, who told “People” magazine, “I read the script, and, as I’m reading it, I pictured Goldie the whole time. There was never anyone else.” Schumer went on to tell a story about running into Hawn on an airplane and “sort of creepily” following her from the airport terminal and pitching the project to her. (Hawn says she does not remember the incident).

I found the interaction between the two blondes very natural and authentic, although the critics who have complained of the crassness of language and situations are not wrong. (One scene, in particular, involving Amy giving herself what used to be called “a spit bath” in a ladies’ rest room and washing all  unmentionable spots, with the door swinging open at a key juncture so that the man who has been chatting her up at the bar gets a good look at her. That scene is Exhibit A, but the row behind me found it to be pretty damn funny, and I can’t argue with them.) Perhaps you’ve seen that scene in trailers, as well.

My favorite character, other than the two leads, was Christopher Meloni (television’s SUV: Special Victims’ Unit) as Roger, a cashier from Rochester who misrepresents himself as a seasoned jungle guide, when, in reality, he has only spent 3 weeks in Ecuador and is wearing a hat from J.C. Penney. When their intrepid guide instructs them to swing across a deep canyon on a vine, saying, “I’m the man so I’ll go first” and the vine instantly breaks, I laughed. When he instructed the mother/daughter combo to “take the first 10-hour shift” so he can sleep, I smiled. His character was fun and funny.

Less fun or funny was the bad guy of the piece, Morgado, played by Oscar Jaenada. It seems that Morgado employs good-looking young men (in this case, Tom Bateman as James) to lure hapless single females on adventures that will involve kidnapping them and holding them for ransom. Once in the clutches of Morgado, the women have to call home and implore Jeffrey to ransom them.

Jeffrey is one of the three most annoying characters in the film. He makes so many calls to the U.S. Embassy that the agent on duty (Bashir Salahiddin as Morgan Russell) finally says, “If you feel the urge to call again, resist it.”

The other two annoying characters are Ruth and Barb, played by Wanda Sykes and Joan Cusack. I didn’t find that either of these two talented comic actors added much to the movie, but I do appreciate the studio’s savvy promotion and marketing. It was released on March 12th, which means that it was the perfect choice for Mother’s Day.

“Snatched” also cost only $42 million to make and quickly moved up to second place (behind “Guardians of the Galaxy II”) in money made, and “Guardians of the Galaxy” is a vastly more expensive film. Goldie brought in the older crowd and Schumer’s fans were also in attendance, plus the Hawaiian jungle settings were convincingly tropic, with cinematography by Florian Ballhaus. (Schumer, who just broke up with her Chicago boyfriend of 18 months, was sick for a week with bronchitis and couldn’t shoot during that time.)

Say what you will about the anatomical references (‘Your tit’s out.”) and the crass low-brow humor, if the women behind me were any indication (you could barely hear the dialogue above their raucous laughter), this feel-good movie about mother-daughter bonding will make money and potentially spawn a sequel. (Goldie says, “Definitely there’s a toe back in” and Schumer says that she’d like to make another movie with her idol “as soon as possible.”)

It’s no “Trainwreck” and I mean that in both interpretations of that statement, just as the movie’s title (“Snatched”) is, no doubt, meant to be a double entendre. But it’s still funny with a touching end-of-movie message.