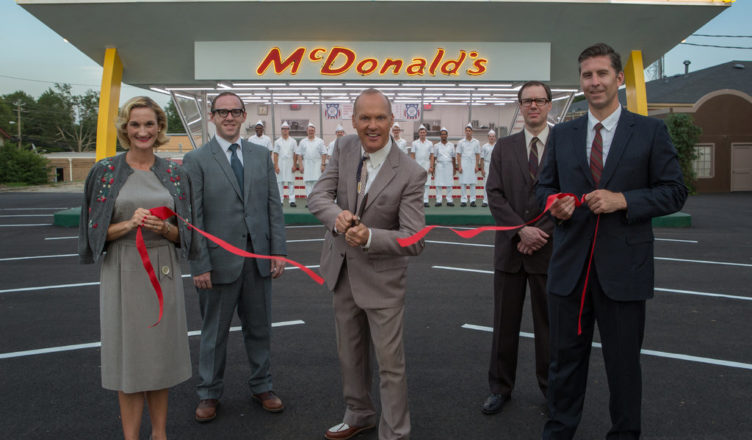 The world’s most famous restaurant is hitting the big screen. The Founder chronicles the humble beginnings and the ugly corporate side of the global phenomenon that is McDonald’s. Michael Keaton plays Ray Crock, the face of the corporation and the man who took the company to its greatest success. On the other end of the spectrum were the McDonald brothers Dick (Nick Offerman) and Mac (John Carroll Lynch) who were the first ones to invent the fast food chain.

The story of the McDonald’s fast food chain is fascinating, but not unheard of. So there is a decent amount of small privately owned companies that become mega corporations, but McDonald’s is different. It’s an symbol of pop culture. It resonates around the world. It’s wildly surprising that the story of this company hasn’t been told on the big screen till now. It was long overdue.

Director John Lee Hancock takes the right approach in telling the story. The movie is very colorful and vibrant. From the colorful dynamic look of the restaurants to costumes the actors wear. It all looks cheery and family friendly. This sort of visual vibrancy was necessary for a film that had the potential to be dull due to the nature of the source material. Even the conversations seem to always have a purpose and value. Stakes were high throughout.

The actors are crucial to the execution of the story in this movie. Even though Michael Keaton is playing a real life guy, his portrayal of Kroc is reminiscent of his character in Birdman. Kroc is depicted as an over-the-top neurotically persistent ruthless man that is never satisfied and Keaton does a heck of a job projecting it, even the speech pattern that Kroc seemed to embody.Keaton does a lot of self-narration and breaks the fourth wall occasionally, it oddly works, mainly because his character is such a narcissist that hides his ruthless nature underneath his brilliant visions. Nick Offerman steals the show with his deadpan comedy by playing Dick McDonald, a straight-faced serious righteous by the book “founder” of McDonald’s, with Carroll Lynch playing his vastly subtler equal. Some nice supporting performances from Patrick Wilson, Linda Cardellini and Laura Dern.

On a personal note, this film had some added interest to me in part due to the first McDonald’s store being the one in Des Plaines, Illinois. That’s my hometown. I got a kick out of the movie mentioning that story and putting a focus on it. The film correctly mentions the street name (Lee Street) it’s located on and the look is fairly on-point. I wasn’t around when the McDonald’s first opened, but clearly the movie was filmed on a sound stage or somewhere in LA, because the area locations in the background don’t resemble anything that I know it to be. The surrounding suburbs are also correctly identified in the movie, but Arlington Heights where Kroc lived looked a lot more like an LA suburb than the housing that currently exists there. Surely the area could have changed, but the houses most likely didn’t. The reason it didn’t appear authentic was that it looked too “perfect”, with a lot of trees and house models that aren’t the same as they are in other states. My point is that if they wanted to be as faithful to the look of the locations then they should have spent a few days filming out here.

While the story is interesting, it’s a slowly unfolding movie. It’s fairly detailed, but some of it feels it’s just to extend the runtime of the film. On the basis of the subject the story is better suited for a documentary that can be explained in about 30 minutes. Michael Keaton is the primary focus. His character second. McDonald’s third. The fast food chain becomes a side story and more of a byproduct of all that is Kroc and his persona. To play devil’s advocate, the movie is called The Founder, so they do still to centering it on that very person, not the restaurant food chain.

The story of the creation of McDonald’s is one of those stories I felt I knew a little bit about, but in reality I didn’t know much. The movie does a really good job detailing the start and rise of the restaurant. From the humble beginning creation of the McDonald brothers to the ruthless takeover by Kroc that took it to new heights. It’s hard to like Kroc as a person. He treats everyone around him like trash, but you have to respect his great mind and vision.

The film isn’t biased, and is more of an anti-McDonald’s than a commercial for it. Kroc is the central figure that everything revolves around, but he’s painted in a honest light that doesn’t favor the character. Effort was made to portray the McDonald brothers as honest and caring businessmen. The film does justice to exposing the dirty little secret that turned into an iconic food institution all while having Keaton turn it loose as Kroc. It can’t be an easy feat to make a movie like this compelling enough for nearly two hours, but that feat was accomplished due to the meticulous storytelling and portrayal of Kroc.

The Founder is a movie you should be bored by due to the lack of any action and much entertainment value, but it hooks you with the characters and the look at the rise of the corporation and all the factors that go into it. Behind the face of the company there is a place of origin you never hear about, but this film tells you all about it. The “golden arches” were built on trust, but soared to the the unforeseen heights with the vision of an asshole. I’ll take an order of The Founder, so should you, you can even add a coke and fries to it.