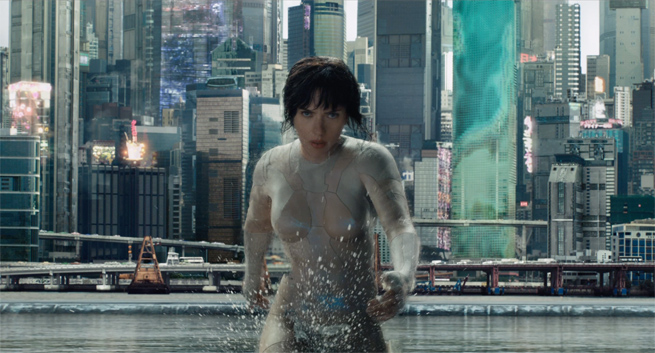 Ghost In The Shell looks amazing thus far, and it almost looks so good fans may forget about it’s white-washing.

No but seriously, white-washing aside, these new Ghost In The Shell trailer snippets looks nothing short of greatness as they intrigue the viewer like a fly towards a light.

Scarlett Johansson looks amazing as Major Kusanagi, and this new action sequence looks like a perfect parallel to the original Ghost In The Shell animation.

For those of you that don’t know, Ghost In The Shell was the original inspiration for movies like The Matrix, as it worked with aesthetic views and eastern philosophy, setting the foundation for some of Hollywood’s biggest films.

Watch The New Ghost In The Shell Teaser Below:

You can read the Ghost In The Shell movie’s, official synopsis below:

“Based on the internationally-acclaimed sci-fi property, Ghost in the Shell follows the Major, a special ops, one-of-a-kind human-cyborg hybrid, who leads the elite task force Section 9. Devoted to stopping the most dangerous criminals and extremists, Section 9 is faced with an enemy whose singular goal is to wipe out Hanka Robotic’s advancements in cyber technology.”

The full length Ghost In The Shell trailer is said to be very visually stunning and is expected to arrive at some time Sunday.

Both SILENCE and GHOST IN THE SHELL look visually stunning. GHOST trailer is set to a Depeche Mode song, wildly colorful action sequences