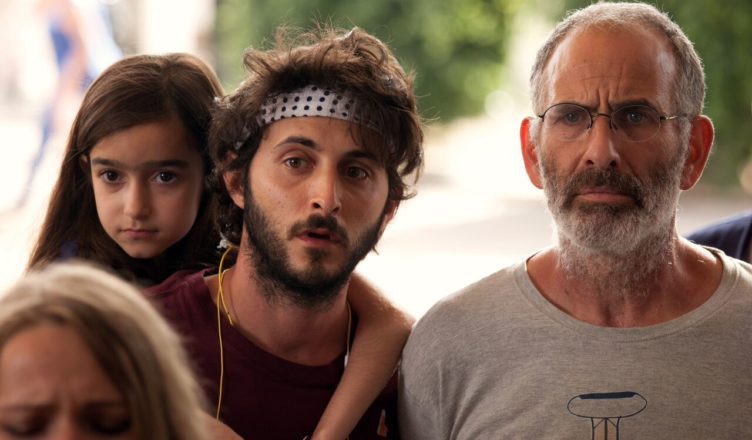 From Israel (Hebrew, with subtitles)

This first feature from director Asaph Polonsky examines how a Jewish couple in Israel is coping with the death of their only son at the age of 20, after sitting Shiva, as per Jewish custom.

Rather than dwelling on the suffering that led up to the inevitable death of their son (which the young filmmaker told us he felt had gone on for perhaps two years before Ronnie Spivak’s death), this film is about the aftermath.

The father and mother (Shair Aviva and Sharon Alexander) react totally differently. Vicky (the mother) goes about her normal routines, even returning to her classroom to teach. She seems to be the anchor to reality and is keeping her distraught husband more-or-less grounded. I say more-or-less because Eymal Spivak (Shair Aviva) decides he wants to learn how to roll a joint and smoke medicinal pot liberated from his son’s hospice room with his neighbor’s young son, Zooler. His reactions to his son’s terminal illness, (in terms of an American equivalent), reminded me of the terminal girl on the television series “Shameless” who is a doctor and takes up with Frank Gallagher, indulging in things she would never have done, if healthy.

Eymal also becomes hostile towards the neighbors (Zooler’s parents), primarily because they abandoned the couple and their sick son, Ronnie, over the course of his illness. Things even come to blows at one point, but the blows are somewhat comic.

The best thing in the movie is a moving eulogy delivered by a rabbi at a service that Eymal attends. In the Q&A following the film, director Asaph Polonsky told us that the eulogy was an adaptation of what his father wrote for his sister, who died young. It is a touching bit of writing and makes for dialogue that you will remember (“And I felt how my heart was breaking inside me.”) It’s so good that it might have been better to work it in sooner in the plot, if possible.

The second best thing about the movie is the character of Zooler, especially his spectacular air guitar solo in the Spivak’s living room. The young actor playing Zooler (Tomer Kapon) is a find. He would make a far funnier heir to Owen Wilson’s brand of droll comedy.

The third best thing about the movie was the little girl, who was selected from among 90 young girls who auditioned and was 8 or 9 when shooting took place. The director shared that the child’s mother was reluctant to let her participate (it is a good thing for the film that she did).

It should also be mentioned that the music in the film is very good (Aviv Aldema, Ran Bagno supervised) and that Tamar Aphek wrote “Dream Inside A Dream” especially for the film. The song “Star Quality,” by an Israeli artist who had turned down other requests to use this particular song, was used effectively in the air guitar sequence and Director Polonsky mentioned a good friend who played double bass was also helpful

The character of Vicky (Sharon Alexander) is hard to read. Only once, in her dentist’s office while having an exam, do we see any real emotion displayed. It is somewhat understandable because the couple has been dealing with the knowledge of their son’s impending death for a long time, but Vicky needed a scene like Angelina Jolie’s in “A Mighty Heart,” where Vicky gets to privately mourn in a bigger onscreen way. And, as mentioned above, the eulogy is so good that it would have been even more powerful earlier in the film.

The only other “bad” thing would be that we don’t get to see more of both Eymal and Zooler. Their hi-jinks together are delightfully loopy. The director informed us that the actor who played the lead is well-known in Israel for sketch comedy in the 90s and just won the Master Chef VIP competition the day before. So, versatile, then—as is Tomer Kapon (Zooler).

Like Aharaon Keshales, the breakout Israeli director who gave us “Big Bad Wolves,” be prepared to hear much more from Asaph Polonsky.

One thought on ““One Week and A Day” Has U.S. Premiere at Chicago International Film Festival”