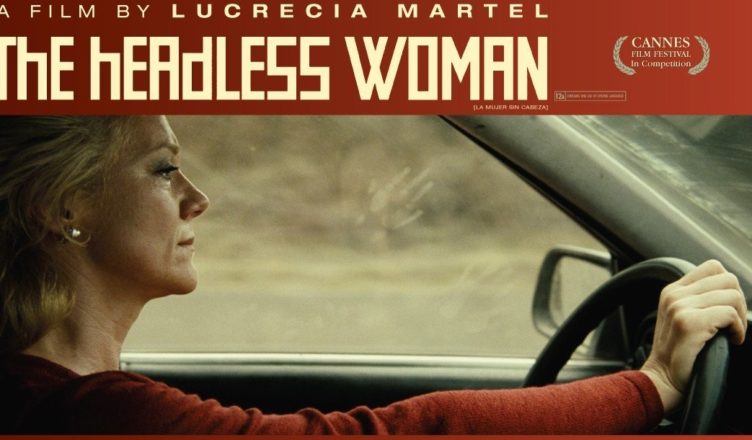 Wow.  A lot goin’ on here.  So let’s jump right into a hearty but brief dissection of the unusual and unorthodox Argentinean drama “The Headless Woman”.

A well-to-do dentist (María Onetto in a mesmerizing performance) hits something with her car on a dirt back road.  A dog?  A kid?  It’s not made expressly clear as she doesn’t go back to investigate, instead choosing to drive onward.  This occurs in the first few minutes of the story.  For the rest of the film we watch as this woman descends ever deeper into a kind of detached and dazed mental and emotional disintegration.  Metaphorically, she has “lost her head”.  Is she riddled by guilt?  Fear?  Uncertainty?  Anything and everything?  Writer/Director Lucrecia Martel never brings this entirely into focus, not unlike several of the fuzzily photographed scenes she utilizes to tell her peculiar tale.

One thing for sure, however.  Martel has intentionally fashioned a treatise on an indoctrinated class separation between “the haves” and “the have-nots”.  She decisively presents this socioeconomic chasm as firmly entrenched institution in her native Argentina.

What is not nearly as obvious is the interpretation of “The Headless Woman” as allegorical commentary.  And while, granted, this may be a stretch, it is not out of line by any means, either.  To wit, Martel seems to be suggesting that this woman’s capacity to put a potential tragedy behind her virtually as if it had never even happened is at least effectively similar to an apparent reluctance by many in Argentina to recognize the appalling and systematic mass executions by the country’s government of those classified as dissident and subversive from the mid-1970’s through the mid-’80’s.

The closing blurred images of “The Headless Woman” depict a bewildered soul, one by way of the machinations of those around her who possess the power inherent to make unpleasant things “go away”, is free to go on about the privileged preoccupations of fraternizing and partying with those of “her kind”.  And may the past be damned.

Or, more accurately, as we have come to understand over the trancelike course of events heretofore chronicled, and which are almost unquestionably still fated to linger in the memory of this descendant of the fortunate, damning.