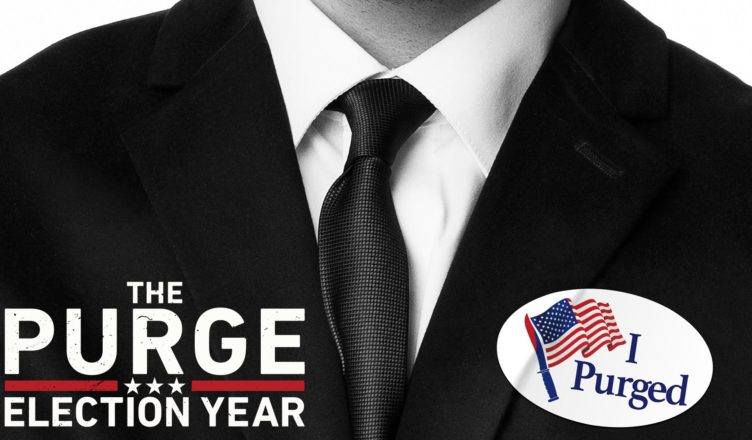 It’s now been two years since the events of The Purge: Anarchy occurred and we now see Leo Barnes (Frank Grillo) working as a high level security guard for the presidential candidate and Senator, Charlie Roan (Elizabeth Mitchell). However there’s one thing, the rules have changed this time around. Now anyone including the wealthy and government officials are no longer exempt, which creates some tension between Senator Charlie Roan and her rival for presidency, Minister Edwidge Owens (Kyle Secor). The Senator wants to put an end to the annual Purge once and for all, however her views and beliefs could be deadly. We definitely see a different tone from the first Purge (which is actually quite forgettable) to the second one. In this third installment, you can clearly sense the uprising in society where people are fed up with going by the government’s rules. What is eerie about this, is that even beyond the extremity of the plot, it hits really close to home.

What harms a lot of films that turn into franchises is when a bunch of different writers, producers and directors are hired to do each film. Each person has a different vision and that can cause the future films to flop drastically (Think, Terminator and every other movie after T2). Fortunately we had James Demanaco write and direct all three films and it shows! This is also a franchise where the films in my humble opinion, got better and better as new installments came. In The Purge, there was criticism about how this annual atrocity of crazy people committing legal crimes for 12 hours was not shown. So in return we got that in The Purge: Anarchy. In this third (and maybe final?) one, we not only see the crazies coming to light, but we also see the ugliness of extremists within the political scene. I couldn’t help but to compare it to what is going on today, although it isn’t quite that extreme, I’m referring to the hypocritical attitudes of what is seen every where today.

You have the Senator that speaks about how the annual purge does not benefit society (well duh, can we say: disaster?), and in contrast the Minister is defending it by basically saying it is a “cleansing process” for all Americans.  I thought it was actually quite comical when I saw him justifying the purge while referring to bible verses. Sorry to say, but I couldn’t help but think of right wing extremists in real life that do this today, currently! Anyway, that is another rant I won’t even go into. Whenever you have a huge influential law, there is always a group who disagrees. We got a glimpse of the anti-purge group in the second one, but now we really see what they are about in this film.

My absolute favorite scene actually involved seeing the teenage purgers, which is something we haven’t really seen before. They really let us see how this “cleansing process” of purging would affect self entitled teens. I mean who gets THAT mad over a candy bar right? Right..? I’m not sure if the Director is looking to make this as an end to the franchise but I didn’t get a “trilogy” feeling to it. In other words, I feel like there was so much more to be said and done. Even though the plot was  interesting, I’m hoping at least we get to see another Purge and I’m not sure what direction they will take it next time around…if there will even be a next time.In general I found that throughout this movie there were a lot of unanswered questions. For example, there were prominent characters that had a great influence on Leo Barnes himself that caused him to change his mind about purging. It was disappointing that there wasn’t even a word mentioned about them. Especially since we see a glimpse of why the Senator is against purging.

They have that in common and his backstory is just as important. I understand maybe the actresses couldn’t or did not want to be in the movie but we couldn’t at least get an update? Also  there was a what I call, a “Michonney” (For those of you who don’t watch Walking Dead or read the comics, look up this character and you’ll understand my reference) acting girl (Betty Gabriel) who was a bad ass supposedly. However, I didn’t understand why she was a bad ass! Why was the candy bar girl so impressed and almost intimidated by her? I mean her character was convincing but…why? Overall, this movie did its job. It was suspenseful without trying too hard, and it also mirrored political aspects that are very relevant for today. It reminded me of a modern day George Orwell story of a dystopian society. You really get to see the ugliness that comes to light when humans are given their “right” to do bad things unjustifiably. We saw a glimpse in The Purge, more of it in The Purge: Anarchy and we finally see it more of it full fledged and even from the government’s perspective in The Purge: Election Year. Now that I think about it, election day is coming up. Let us all choose wisely!  Remember, “Keep America Great!” Years after sparing the man who killed his son, former police sergeant Barnes has become head of security for Senator Charlie Roan, a Presidential candidate targeted for death on Purge night due to her vow to eliminate the Purge.