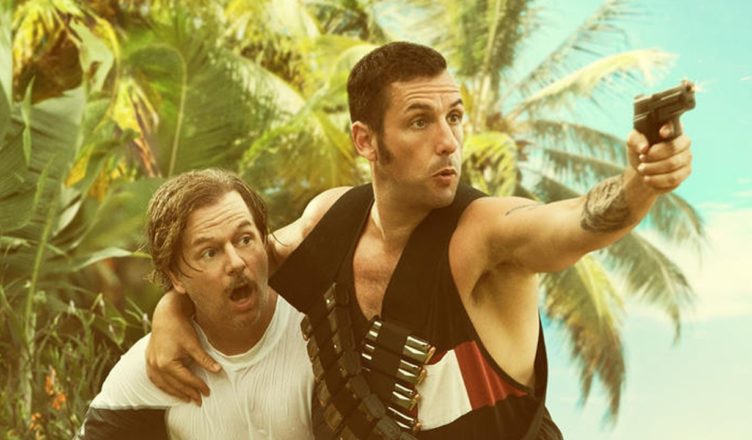 The life of a bank manager is turned upside down when a friend from his past manipulates him into faking his own death and taking off on an adventure.

David Spade is a guy who pretty much was the least popular person in high school. He had a crush on the most popular girl, married her after she divorced the most popular guy from high school, and began a life of mediocrity raising the offspring of his wife’s past relationship and pretty much bending over backwards as she takes advantage of his kindness. He’s a meek guy that comes across what appears to be a strong alpha in his old high school chum who invites him out to hang out and take a day to himself. Things get crazy from there as there are some deaths faked and boats exploding and adoption of other people’s lives as they move to puerto rico.

The Do-Over is the latest Adam Sandler led film released on Netflix.

Some insanely funny moments. Adam Sandler films are usually ripe with physical comedy and visual gags and this movie has some really good ones that will make your stomach hurt from laughter. I think David Spade is a fun pairing for Sandler and they have decent chemistry. Now it may not be as good or as funny as David Spade in his heyday with Chris Farley but it is serviceable stuff with him playing the reserved guy in the duo and Sandler being the more extroverted of the two. I have to admit that I found myself getting caught up in the feel good moments of the movie. Whoever coordinates the muscial accompaniment to these movies has this down to a science and I often get caught up cheering with the movie when they reach their happy ending… and then the realization that it happened is followed by shame and introspective thought on how susceptible my thoughts and feelings are to a simple soundtrack.  It’s the Adam Sandler formula. If it didn’t work, he wouldn’t still have work.

Adam Sandler is Adam Sandler in and Adam Sandler movie in which he goes by another name but dresses and acts exactly as Adam Sandler! T-shirts, basketball shorts, and just about any other loose fitting clothing that you can imagine is the norm for this guy who pretty much works as if he’s on vacation ensuring all of his films require him to travel to some sort of extravagant tropical location and Sandler his way through another Sandler movie with a Sandler scenario to Sandlering effect.

The movie is too long! It overstayed it’s welcome halfway through while clocking in at 2 hours! 90 minutes is the sweet spot for a Sandler movie.

The movie has its moments and it’s clear that this would not work if the movie was released in theaters. Again, I feel that Sandler may have found his niche with these Netflix features as I am happy to find a movie that has a few laughs but didn’t cost me more than my already existing subscription. It’s definitely worth a watch if you’re an Adam Sandler or David Spade fan or just want to watch Paula Patton do stuff in Puerto Rico but not much else.