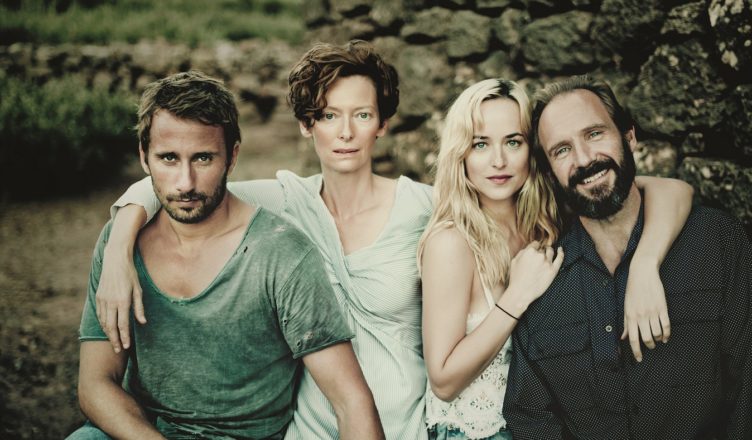 Synopsis: A famous rockers life is at a profession and personal crossroads as a former lover unexpectedly arrives with his daughter for a visit.

So at least the movie has a significant amount of water to justify the title. It’s a fairly big splash, one I wasn’t sure how to clean up. The best way to summarize the film would be awkward. The plot centers on four characters, famous rockstar Marianne Lane (Tilda Swinton), her much younger aloof boyfriend Paul De Smedt (Matthias Schoenaerts), Lane’s former love interest and obnoxious visitor Harry Hawkes (Ralph Fiennes), and Hawke’s daughter Penelope Lannier (Dakota Johnson). Believe me this is an odd foursome. The plot centers around an unexpected vacation visit, where Hawkes and his daughter come to stay with Lane and Smedt in a picturesque Italian beach town.

There is a lot of sex in it. Not to sound like some sort of perv, but the sex is explicit, and refreshing in a way that filmmakers tend to shy away from. The first scene delves right into it as Marianne and Paul are going at it hot and heavy in the pool, not much is left to the imagination, it sets up the frequent theme of the movie. This is a film that’s very sexualized and to their credit, doesn’t shy away from it. The contrast between the characters is noticeable. Hawkes might be Ralph Fiennes most polarizing character he’s done–that’s saying a lot. Fiennes is incredibly bold and wacky in the role. Hawkes seems like he’s on about 30 energy drinks at any given moment. It’s kinda hard to watch him be neurotic at all times. He goes for it though. Not afraid to put it out there–literally. He has two full-frontal scenes, not holding back a bit. That’s brave. Once again, they really went for it with the nudity and sexuality. Dakota Johnson was much better than her recent work has indicated. There is some intrigue and mystery to her character. She was far more sexier in this film than in Fifty Shades.

The cinematography is unique. The grainy color palette gives this movie a classic transcendent look. It can easily be taking place in the 60’s through the 90’s just based on the appearance. The Italian beachy countryside is visually stunning. It’s a nice directorial touch from Luca Guadagnino and cinematography from Yorick Le Saux. The European vibe is certainly noticeable. Doesn’t suggest any American feel to it.

It is hard to invest in characters who don’t seem to have any redeeming qualities about them. None of them seem to be anyone you’d root for or even care for. They are all sort of ugly people on the inside. The plot doesn’t seem to have a clear focus or objective. They just sort of hang and don’t do much. Grocery shopping. Host parties. Go to dinner. Have a LOT of sex. Slow plot progression. Disappointing story arch and conclusion. The climax..of the film (not the other kind) is the only point of the movie where there is some genuine intrigue and suspense, then it manages to fall flat in the final scene.

“A Bigger Splash” just flatlines throughout. Little at stake, besides their warped relationships. The actors do the best with the unconventional characters they were given. Tilda Swinton barely utters a word in the entire movie due to her vocal surgery her character undergoes. Way to use a premiere actor and not have them talk in the entire movie. This movie would have been a lot better had there been an a more concise focus on the plot, instead the filmmakers invested everything into these uninspiring characters. “A Bigger Splash” ultimately ends up being a bigger waste.