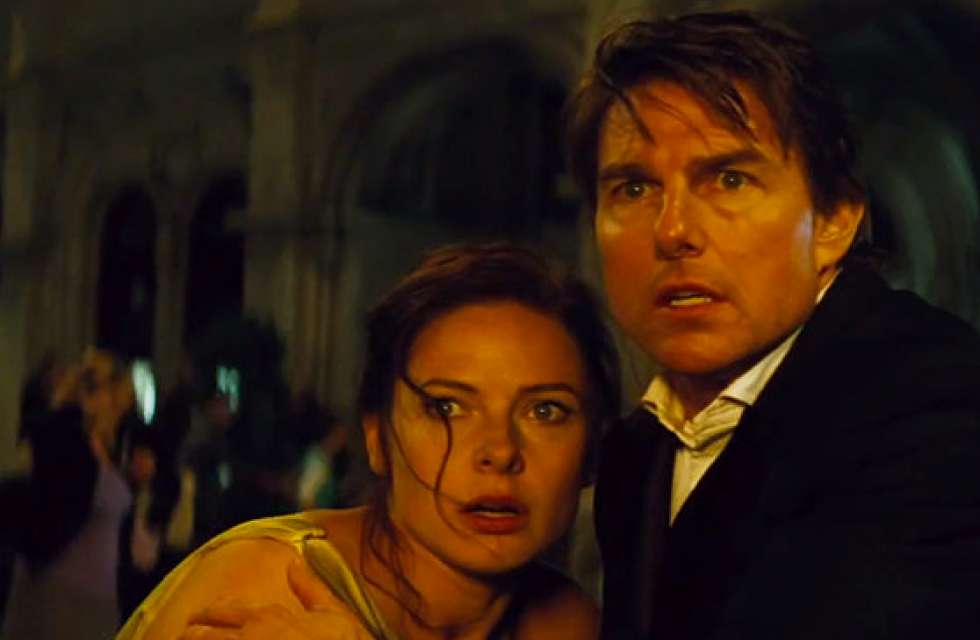 Synopsis: Ethan and team take on their most impossible mission yet, eradicating the Syndicate – an International rogue organization as highly skilled as they are, committed to destroying the IMF. (Imdb)

Tom Cruise just can’t let go of Ethan Hunt, rightfully so. In the fifth installment of the Mission Impossible series, Rogue Nation, Cruise is back once again to take on the role of super spy Ethan Hunt. Cruise just can’t seem to help but outdo himself in each subsequent installment to this franchise. He’s more daring, more buff, and more outrageously entertaining than in the previous Mission Impossible films. This time around the Impossible Missions Force, or IMF, has the pleasure (and by that I mean risking their lives and jobs) to track down and eliminate an international rogue organization called the Syndicate. The IMF crew is in a bit of hot water with the Senate and CIA director Alan Hunley (Alec Baldwin) over their previous reckless missions. The group is on it’s last legs, as IMF agent William Brandt (Jeremy Renner) attempts to cover up the latest daunting mission that Hunt is working on undercover.

Cruise doesn’t wait a minute to enthrall the audience. The first scene Cruise is in he jumps onto the wing of a jumbo airplane as it’s blasting across the runway. Apparently and unsurprisingly this was a legitimate stunt, and Cruise indeed was handing onto the side of the plane, no CGI folks, this guy is legitimately insanely daring.

After his brief daredevil act on the plane, he’s captured by the first line of the Syndicate group members. It’s where Hunt gets a face-to-face meet and greet with his ally/enemy Ilsa Faust (Rebecca Ferguson). The global excursion begins in London, moves to Austria, then reaches Morocco, and Hunt’s buddy Benji (Simon Pegg) is there to help him along the way. There is a swarm of twist, turns, and double crossing that doubles with confusion in Rogue Nation. It’s what keeps the movie exciting, but also what hinders it. The constant barrage of action is fun until it starts getting confusing and spins out of control, all done in typical Mission Impossible fashion.

The producers don’t veer off from the elements that make this a successful franchise, which is the heart pounding action and non-stop entertainment. There is a well choreographed fight scene between Hunt and a hired assassin that takes place on top of a theater catwalk, that might make you queasy. Additionally, there are some fascinating chase scenes in Rogue Nation, notably a motorcycle chase through the curvy hills of Morocco. I wouldn’t be surprised if that was actually all Cruise pulling out all those sweeping maneuvers.

It’s hard to fathom how at age 53 Cruise is able to maintain his boyish looks, but more impressively the supreme physique and stamina he displays in the film. This guy is inhuman. He’s buff, fit, and legitimately still a top-notch action star. He’s owned the role of Ethan Hunt, it would be hard to replace him with anyone in this franchise. There won’t be another Tom Cruise.

Ferguson is a capable, and fitting, addition to the film. She’s an ass-kicker and does it in style as a strong female counterpart to Tom Cruise. Making their Mission Impossible returns and rounding out the supporting cast are Jeremy Renner, Simon Pegg, and Ving Rhames. They are all solid in their roles and add humor, especially Pegg’s character.

Christopher McQuarrie is to Tom Cruise as Martin Scorsese is Leonardo DiCaprio, or what David O’Russell is to Bradley Cooper. They are all directors that exclusively seem to prefer to work with their favorite male leads on most of their films and with Rogue Nation being only the third directorial credit to his name I think you will be seeing a lot more of McQuarrie in the years to come. After the work he did with Cruise on The Edge of Tomorrow, McQuarrie seems to have a good grasp on the action genre, especially when working alongside Cruise.

Mission: Impossible-Rogue Nation is a fun popcorn flick. It’s what you expect out of a summer blockbuster. It’s a franchise that’s been around for a while and continues it’s success by staying the course, while raising the stakes for insane Tom Cruise stunts. Rogue Nation is confusing and complicated at times, way too many double crosses and attempting to figure out who is working with who and who is plotting against who can make your head explode. Confusion aside, it’s tough not to like this film. It is exactly what it sets itself out to be. It delivers on the action and entertainment by packing in as much fighting, blow em’ em gadgets, and daring stunt acts. Tom Cruise proves it again that he’s still got what it takes to lead an box office blockbuster. The film’s theme song is synonymous and will have you humming after the movie ends. No Mission Impossible fan should have any problem with this film, it might be the best one the franchise has produced yet.

Additional Thoughts: I enjoyed Rogue Nation for what it is. High octane action and timely humor equals entertainment. The Mission Impossible franchise has established itself as one of the premiere spy movies. It will be interesting to see how it does in the box office after moving up the date to the end of July from the original scheduled fall release. I think it was a smart move to place it at the very end of July, even though another spy film The Man from U.N.C.L.E will be hitting theaters in a couple weeks. Maybe the Mission Impossible brass didn’t want to go against Spectre (James Bond) in the fall, either way it is still more fitting to be a summer movie season. Damn, does Tom Cruse still have the “it” factor!

Cruise Does The Impossible Again