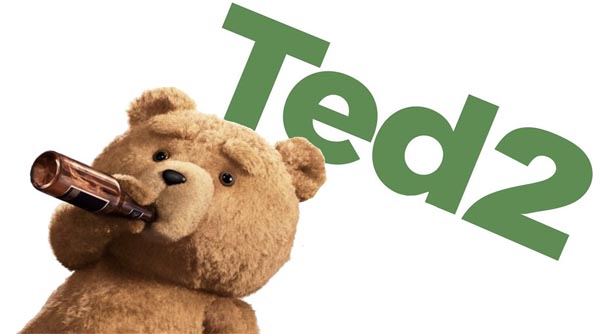 Synopsis: Newlywed couple Ted and Tami-Lynn want to have a baby, but in order to qualify to be a parent, Ted will have to prove he’s a person in a court of law.

What do you get when you take the idea of bringing a Teddy Bear to life and make him a vulgar and obscene friend? You get a unique concept for a film that captivates audiences based on the premise and leaves them laughing from the unexpected nature. Now what do you get when you make a sequel to that film? You get laughs that are a bit watered down and a redundant idea that’s lost its luster.

When it came to Ted 2 I admit that I was interested in seeing the film for its entertainment value, but the allure that brought me into the first film was just not there. There was plenty of the same type of humor but despite the repetition and short-lived laughs, I was indeed laughing throughout the film. When it comes to the quality of those laughs, I have to say that they mainly arose from grotesque shock humor and the abnormal placement of cameo appearances from well known celebrities.

Outside of the laughs we’re left with a story that may seem intriguing and pertinent but it’s really a mechanism for introducing the same elements that were used in the first film. We still find Ted in a situation that causes distance between he and John (Mark Wahlberg) which ultimately leaves them both on a stoned quest towards redemption. And when it comes to redemption, Mark Wahlberg’s acting could definitely use some. He is not an actor made for comedy. If you thought his performance was awkward in the first film, then Ted 2 will make you think he’s John Travolta trying to pronounce “Idina Menzel.” Seth MacFarlane shines with his voice acting (as expected) and Amanda Seyfried is hit or miss throughout.

Oh and then there’s the out of place “break into song” moments. We get it Seth, you love and have a talent for music, but it does not belong in this film. The musical breaks were annoying in the first film and they definitely don’t do Ted 2 justice. I like musicals too but if there’s a Ted 3 please just get to the story and comedy rather than making us sit through another musical number. Please!

If you’re looking for a film that will make you laugh no matter the cost of that laugh, then I’ll be honest, you’ll probably leave Ted 2 with a smile on your face. But if you’re looking for a clever build up of comedy then those moments are few and far between in this film. While I was one of those that left with a smile on my face, I admit that I could have waited to see this film on a Redbox release.