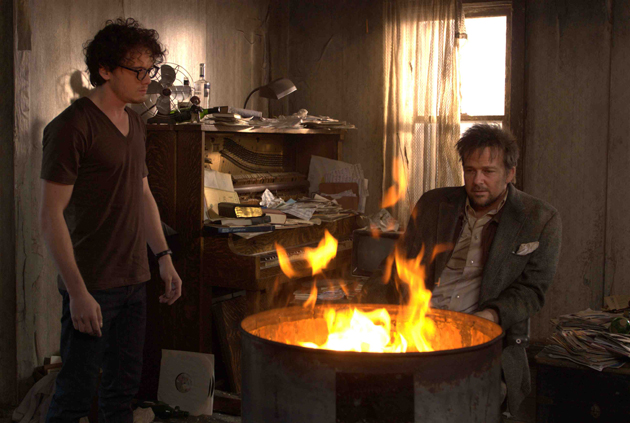 Synopsis: The bonds of brotherhood, the laws of loyalty, and the futility of violence in the shadows of the US Mexico border gang wars. (c)Imb

Broken Horses is the first American film by famed Indian director Vidhu Chopra. He does a respectable job in his first attempt at American cinema.

The theme of the film is simple–brotherhood. It’s a story of two brothers growing up on the US-Mexico border in a hostile environment. After their fathers death, the boys are mentored by a local crooked sheriff. Eventually, the brothers go separate ways. The younger brother Jacob (Anton Yelchin) moves to New York to pursue a musical career, while older brother Buddy (Chris Marquette) stays behind. They reconnect and are brought back together when Jacob goes back home to plan his wedding with Buddy. It doesn’t take long for Jacob to realize that he’s a threat to the town. Will the town voices get in the way between the boys or will brotherly love prevail?

Broken Horses is a slower paced film. It’s a character driven. The action is minimal, but suites the theme of the film. Aside from the relationship between the brothers, the character of Buddy apparently is dealing with a disability. Marquette’s performance is quite endearing. His character carries the film more than any other character. Yelchin, doesn’t really stand out in his performance. I expected a bit more from him, after all the solid work he’s been putting out the last couple of years. I didn’t feel like we get his best effort in Broken Horses. D’Onofrio has mastered the cop and bad guy roles. He’s a pro. His character of Julius has two sides to him. He could seem like a father figure to the boys, but also as a manipulating tyrant. Thomas Jane makes a brief cameo at the start of the film. Wish an actor of his magnitude was utilized a little bit more.For a character driven film, the performances are solid, but not spectacular.

The film is aesthetically pleasant. The outside long shots of the ranch are colorful and pretty. The contrasts used, and incorporation of dusk colored skies adds an artsy appeal to the film. The cinematography by Tom Stern is one of the highlights of the movie. The visuals project a Western feel to the movie.

I did find myself a bit disinterested at different points of the film. This isn’t the most exciting movie, it’s slower pacing makes it boring at times. The ending caught me off-guard a bit. Too much action at once makes it feel misplaced. For a film that carries itself as an indie, the Hollywood ending was a bit too much. I appreciated the effort that Chopra put forth in making this film. It’s by no means a bad film, but it’s not great either. It’s just sort of an average indie film.