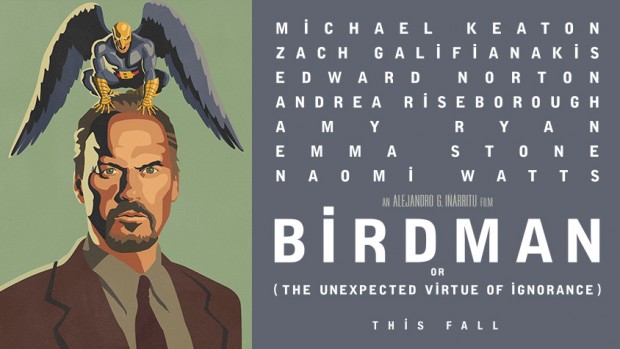 Birdman is being considered as Michael Keaton’s comeback film and with good reason. With rave reviews left and right, Birdman has the potential to be Keaton’s first Oscar nomination. To say that I enjoyed the film (and I did) would be a reiteration of what many critics are already saying. Instead I would like to focus on the film’s alternate title, “The Unexpected Virtue of Ignorance” and the defining reason for its existence.

Birdman is more than just a film, it’s a properly balanced reflection of today’s society. It places Hollywood film and Broadway theater at war with one another based on the notion of large scale notoriety versus artistic acceptance. Riggan’s (Keaton) internal conflict between proving himself as a credible actor through theater or embracing his worldwide fame reveals the dark sides of both theater and film. Birdman is balanced in such a way that it depicts these two adversaries as they are generally perceived through the public eye.

Broadway theater is small yet intimate. The first half of the film shows this intimacy through a focus on developing dynamic characters through dialogue driven scenes with recurring backgrounds. There’s not much flare to these moments but instead a reliance on connecting the audience with unique and relatable characters. The connection to these characters defines the purpose of theater and the importance of the actors.

While theater may be intimate, the mechanics of theater are filled with many struggles. The hardships of theater are shown through the financial burdens and unexpected moments on stage. These hardships become amplified when the politics of theater are revealed. In the film, much like real life, the success of a show relies upon the opinions of a select few critics. They hold the fate of a show in their hands as they have the power to sway public opinion. Birdman demonizes that power revealing critics to be influenced by their own personal vendettas which could lead to an undeserving bad review in turn killing a show. While this may be an extreme, it shows the barriers to entry that exist within theater cliques.

Hollywood films (or blockbusters) are known for their extravagance. Riggan’s “daydreams” of his role as Birdman accurately reflect this point of view. The moments of giant explosions, gunfire, and digital surround sound are all depictions of the stereotypical Hollywood film. The public that embraces these films are depicted as technology driven, social media junkies that are appeased by the simplicities of redundancy and everyday life. They associate Riggan with his big screen character (Birdman) and acknowledge his fame rather than talent. While he constantly tries to distance himself from unmerited fame, he is constantly pushed back into an unwanted spotlight. Mishaps throughout theater production gain notoriety while his talent goes unnoticed. He is astounded at the fact that a video of him in his underwear could gain millions of viewers through social media while the general public couldn’t care less about his artistic endeavors. Addressing both the power of social media and the mass appeal of simplistic, formulaic films, Birdman shows how easily the general public can be influenced.

The balancing act of both sides is where the title “The Unexpected Virtue of Ignorance” comes into play. In its abstaining and ambiguous use of words, it addresses both widespread public appeal and the critical viewpoints of a select few. While a well structured critic may have a distaste for some form of widely accepted media, it is important to recognize public appeal. It is important to realize that while a critic’s well informed opinion may carry more weight, it is still another person’s opinion rather than fact.

I’ve been reviewing films for quite some time now and Birdman is a film that has reinforced a mindset I’ve recently established over the past few years. Sometimes critics are wrong. Even if you look at that Rotten Tomatoes score and see a low percentage that still means that someone enjoyed that film and it could be you. Sure if you are undecided about viewing a film, an informed opinion can help, but don’t let it dictate your excitement for a film you’ve been waiting to see.

You may love Spider-Man 3 or even Gigli (God forbid) but what’s important to remember is that you love a film for your own reasons. A film may have spoken to you on some level that others do not understand and despite negativity, you may enjoy it based on your own perspectives. Because of that individual understanding, Birdman is a film that embraces its alternate title. While you may be generally perceived as ignorant for some of your tastes in art, be proud of your individuality. As this film proves, there is a sense virtue in your so called ignorance.