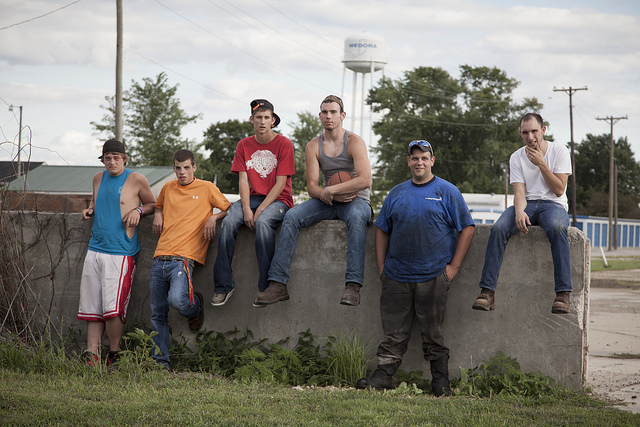 Medora. Small town Indiana. A few hundred residents. Nothing going on, but a great story to tell. Similar to little pockets all over the States, there are thousands of stories waiting to be told that are so far removed from mainstream society, the media, and people’s minds. These stories are important to tell and without documentaries such as Medora, the lives and experiences of small town America will be marginalized and forgotten about by wider audiences. We have been graced (sort of) with the likes of Honey Boo Boo – a small town story turned reality TV phenomenon, reminding us of the many wacko and interesting tales of such a diverse country. But honing in on the gritty, real, non-cranked-up-sass-for-the-cameras folk makes individual stories all the more intriguing and memorable. Like many small-towns in America, Medora was once a happy community, a thriving metropolis – jobs for everyone, most people being employed in the town’s factory, which of course is now closed. In the documentary one shop owner described Medora today as ‘closed.’ This word fits perfectly, closed off from mainstream, closed off to visitors in the sense that it has nothing to offer, closed off from upward mobility. The people of Medora however, still have hope, and that is what this documentary boils down to. Well, that, and basketball. When you have little else going for you, as there is small surrounding opportunity, you have to hope that things can get better. Medora opens with a high-school basketball coach repeatedly yelling at his gormless yet hopeful team The Hornets, that they have scored zero…ZERO points in the match they just played. This is a big deal for any sports team. It pretty much means you don’t have your shit together. You’re fairly crap. After this disappointment-fuelled shout-fest, gloomy music prowls alongside clippings of Medora’s history of low-ranking sporting scores. Medora high school, back in 2011 when the doc was shot had only 72 students – 33 of whom were boys…a slim chance of finding a Wade or Bryant in the mix. Neighboring towns had consolidated their schools increasing the numbers of players to choose from. Another reason for Medora’s failing. Medora follows the handful of Hornets through their daily routine, their thoughts on Medora, basketball, and their future aspirations. It is heartwarming and thought provoking seeing these teens with nothing, hope so much for a better future. Alcoholism, drugs, abandoned buildings, abandoned kids, high school dropouts, broken homes, abuse, and rehab are the norm in Medora. Each kid is affected by their surroundings in some way.

The beautiful way that Medora is shot really evokes empathy. It is neither a sports documentary nor a news documentary. It is the perfect combination of both, making it an all-round great story that I strongly recommend. You follow the team through their season, becoming attached to the Hornets and cheering them on like your team of choice, but it is about so much more than the b.ball. It’s about the struggle of transition from small-town to mainstream, finding your voice, and finding a place – fighting against the looming prospect of diminishing a community. Stark scenery seems to be the epitome of Medora’s landscape. A depressing place. A completely memorable shot – a chilling realization of the desolation and opportunity deficiency is when one of the Hornets, Chaz Gowles leans against a wall inscribed with ‘This Is Hell’ graffiti as he declares, ‘most people outside Medora just think it’s a meth head town.’ There are too many things in the documentary that lean towards this being a possibility.

This generation of young boys who have had it tough don’t dwell too much on their misfortune, instead they channel their energy and frustration into basketball. Even if they are less than mediocre. The Hornets are all they have; it is their main focus, a form of hope and an alternative to trouble. They are, as a group, an inspirational bunch that are fragile and broken in their individual ways, but have love for each other and the team that gives them something to look forward to. They are a collective and not alone in such a potentially lonely environment. Medora reminds audiences of America’s many struggling small towns, which have been pushed aside by city life and flourishing metropolis’, which offer a lifestyle that they could never compete with, yet the residents will not give up on their community.