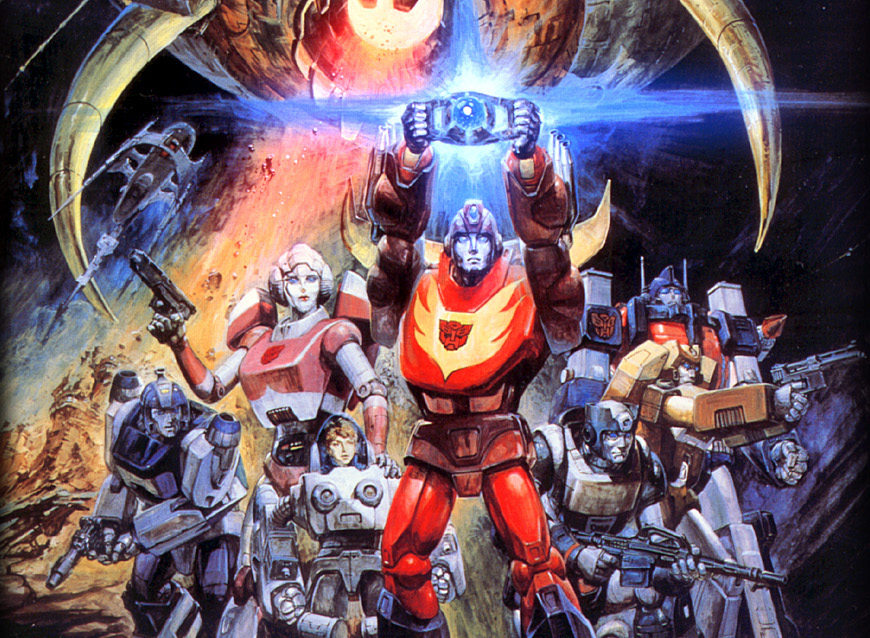 Back in the 1980s/1990s Saturday morning cartoons for a lot of us was a tradition. It was the one day where getting up before your parents did actually meant something. Whatever your ritual was and whatever cereal you ate with your cartoons, a lot of us did it. Sometimes it was always tough figuring out what show to watch if two competing shows you liked were on at the same time. The list off the top of my head is endless: Transformers, MASK, Galaxy Rangers, G.I. Joe, He-Man, Muppet Babies, Go Bots, COPS, Robocop, Rambo, Ghostbusters, and so forth.

For companies and studios involved it was simple, Saturday morning cartoons were one giant advertising time slot. For us kids growing up, maybe you watched for 3 hours or 5 hours. The point is we watched and we wanted the toys that companies put out of our favorite shows. But in specific cases, there were certain shows that were so popular that they led to actual feature films. Saturday morning cartoons aren’t what they once were today, so we thought it would be fun to take a look back at cartoons that actually spawned feature films. The list is specific to the 80s/90s and where the cartoon directly influenced growth into the theatrical market. The animated TV series (aka Generation 1) ran from 1984-1993, since then the Transformers franchise has been released and reconditioned into various spin-offs, reiterations, and is still on-going today. Hasbro had one thing in mind when it initially helped create the blockbuster franchise and it was to sell toys. Its popularity was staggering on the offset and only after two years into its Saturday morning run, in 1986 a fully featured animated movie would be released in the theatres. The film was simply called Transformers: The Movie.

The animated film is iconic given events in the movie dramatically affected the Saturday morning cartoon in terms of storyline plot with Unicron, Optimus’ death, etc. It was a unique adventure for a kid to go into the theatre and have a cartoon film mean more than just your favorite TV show on the big screen. A lot of fans look to this movie as probably the groundwork of what could’ve and should’ve happened with the live action films that have been released. Call it fanboyism or just the reality of where the Transformers were the actual stars of the show and not the humans. But the film gave fans incredibly memorable moments with the Optimus versus Megatron showdown (One shall stand, one shall fall.), Unicron eating up planets left and right (Arblus, look! It’s Unicron!), Hot Rod and Cup’s banter (Heh, not bad for an old timer.), the lovable/hateable Junkions (You talk TV? I talk TV. I talk talk tv packages.), Starscream finally becoming king (AH! My foot!), Soundwave still the ultimate servant (As you command, Megatron.), and of course Galvatron (What’d he say his name was?). Even today the film is a cult classic and for some purists who might dislike the live action adaptations, it might be the one true Transformers movie. The movie despite its popularity as a franchise was a box office failure when it released in theatres but it did allow somewhat of a blueprint moving forward.

My Little Pony: The Movie Another product of Hasbro, the My Little Pony TV series ran briefly from 1986-1987 and was specifically aimed at the female audience. The movie for the cartoon was also released in 1986 with the intention of capitalizing on the current success of the toys and TV series, and even starred the voices of the husband and wife duo of Danny DeVito and Rhea Perlman. The film much like Transformers: The Movie was met by poor box office results, yet despite its results its influence on the Saturday morning cartoon market has been timeless. The series in fact has seen a recent resurgence with its new modern day version amongst children and even a surprisingly older male audience. G.I. Joe: A Real American Hero was another successful toy-line from Hasbro and was a cartoon that originally aired a mini-series from 1983-1984, with eventual syndication from 1985-1986. The movie would eventually release in 1987, but would go direct-to-video due to the lackluster performances of the My Little Pony and Transformers films theatrically. G.I. Joe: The Movie was actually set to release before Transformers: The Movie but production problems delayed its release ultimately allowing Transformers to go first. While the franchise overall has been popular, its notoriety never reached the level of Transformers. It has gone on to release two live action adaptations, but it was the animated cartoon movie which truly allowed all the characters of the franchise to be in the film all at once. Interestingly enough due to its direct-to-video release, the film was eventually broke up in to a five-part mini-series that allowed it to be aired in its entirety in normal syndication on TV. The pizza loving, mutant ninja turtles originally came about in comic book form by Kevin Eastman and Peter Laird in 1984. Its success would soon be apparent as an animated TV series which originally ran from 1987-1996. Like Transformers, the ninja turtles have gone through several reiterations still focusing on the same target demographic. In that same vein its carried new youthful fans moving forward as well as the old fans who grew up watching Michelangelo, Raphael, Leonardo, and Donatello. The ninja turtles would take a bolder approach at the big screen when it was announced that a live action adaptation would be made. Eventually released as Teenage Mutant Ninja Turtles in 1990, the magic of the Jim Henson Creature Shop allowed what Hasbro failed to achieve with its animated theatrical releases, that of basic box office success. The original film was widely successful and would eventually release two more sequels in 1991 and 1993. Its relevancy is still very much in play today as a new live action reboot is set to release in 2014. The Power Rangers is one of the longest-running children’s TV series based on the Japanese tokusatsu Super Sentai. While not a cartoon it played to the live action motif like that of Captain Power and the Soldiers of the Future (1987-1988) where real actors portrayed characters on-screen versus simply voicing animated characters. The Power Rangers came at a time when regulations on TV became stricter with guidelines for appropriateness and overall syndication delivery. Thus while the series came near the decline of the more prominent Saturday morning cartoons it still found success which has continued today with continuous reiterations. The original series aired from 1993-1995 culminating into a theatrical version of the TV series on the big screen. With a bigger budget the film version allowed for more generous special effects and further aided the cult following the franchise has today. Another film would be released in 1997, while not garnering the same box office results it simply added to the lore that is known as the Power Rangers.

If we look closer at other syndicated cartoons its clear to see how even a majority of the superhero films out today started out in an animated format. There are even instances where theatrical films directly spawned cartoon TV versions of themselves (ie. Rambo, Robocop, Ghostbusters). Although Saturday morning cartoons are no longer what they used to be there will always be a definite nostalgia.

One thought on “Top Saturday morning cartoons turned into movies”