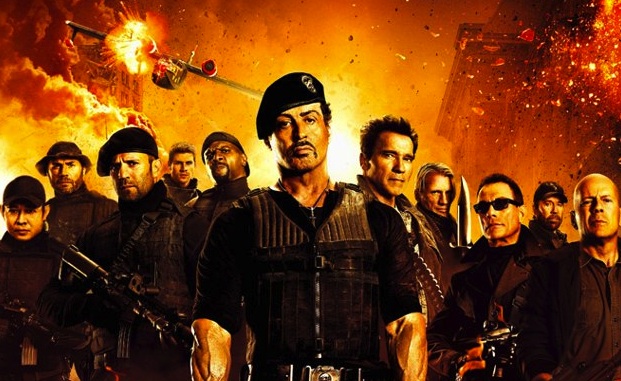 Sly Stallone mentioned early on who he had in mind for the next Expendables film and outright throwing names like Nicholas Cage, Wesley Snipes, Harrison Ford and more. Apparently he’s hard at work on making this dream team a reality as he’s now confirming that Nicholas Cage will appear within the film.

…El Pais (via The Film Stage) talked with franchise star and producer Sylvester Stallonewho confirmed that Cage is locked for the film, but is still trying to lock down Ford, Snipes and the return of Mickey Rourke. Read on!

Here’s a translation of what Stallone told the news outlet:

We are preparing the film with the same passion and commitment as the previous two. We have confirmed Nicolas Cage, a master actor who gives a veneer intellectual group. Hopefully we can realize to Harrison Ford, Wesley Snipes and Mickey Rourke. That is the great mission of the producer. We will continue with the same narrative scheme, the agility and the frenzy, which are inherent to the saga. What will definitely be the last? I can not guarantee. In principle it would be two deliveries, but the affection of the people encouraged us to work on a third. I guess as long as we amused ourselves by offering fun and people, we can continue playing ‘The Expendables’. For now we are not as expendable as it should and as some critics want.

I love the fact that Sly says something and then gets it done with regard to casting of this franchise. Great news and I’m really hoping he’s able to snag the rest of the guys on his wishlist, including Wesley Snipes. That’s all for now…