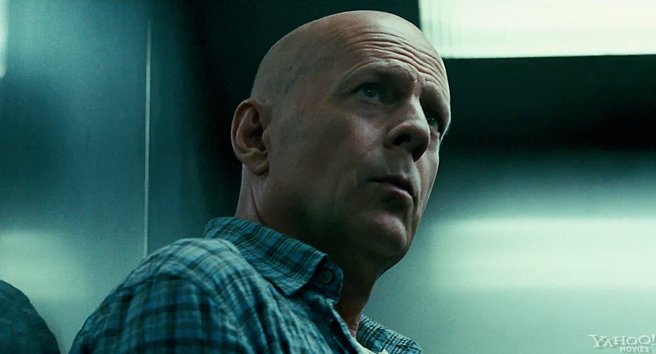 Since the first Die Hard in 1988, John McClane has found himself in the wrong place at the wrong time, with the skills and attitude to always be the last man standing, making him enemy #1 for terrorists the world over. Now, McClane faces his greatest challenge ever, this time on an international stage, when his estranged son Jack is caught up in the daring prison escape of a rogue Russian leader, and father and son McClane must work together to keep each other alive and keep the world safe for democracy

I liked this trailer more than I expected myself to. So with that first impression out of the way, let’s talk about Die Hard in general a little bit!

I’m a fan of this franchise, with the first two films being my favorite. Hans Gruber is the definition of a classic villain. I still crack up listening to Dennis Franz drop f-bomb after f-bomb in his initial scolding on John McClane. Die Hard with a Vengeance has its moments up until the obscure Canada ending. I guess that’s why that film has an alternate ending (if you didn’t know). 2007’s Live Free or Die Hard was a solid action film in hindsight, the story had modern relevance, but I thought it was missing the classic essence of the past Die Hard films. Call it the times changing or PG-13 ratings.

It’s been odd seeing Bruce Willis become almost relentless in the theatres lately. I don’t know if it’s a second or third mid-life crisis, but he’s back to action hero form. I just don’t know if it’s all being forced or he’s found himself with nothing else to do. Either or, ok I guess. I’m intrigued by the Cole Hauser casting for this 5th Die Hard film, I feel like he’ll give a more proper villain weight that was missing from Timothy Olyphant but I almost think that was due to his character. I’m curious about Jai Courtney’s casting and seeing how much of a presence he’ll be on the big screen, I thought he did well as Varro on Starz’ TV series, Spartacus. Then the obvious eye candy of Yuliya Snigir, it’ll be curious to see how it all works. Willis has gone on the record saying there will still be at least one more Die Hard film after this one.

2 thoughts on “Trailer: A Good Day to Die Hard”