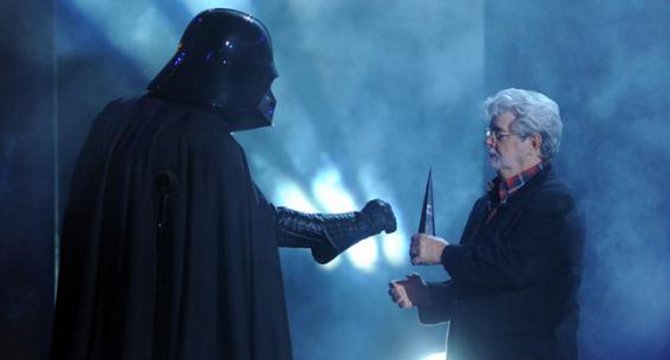 George Lucas has been in this business for decades. He started out like most by working his way up and eventually hit a grand slam with his Star Wars franchise. Fast Forward to today and he has a new film coming out, “Red Tails”, this weekend and a new found outlook on film making. He’s sick of this ish.

“I’m retiring,” he said. “I’m moving away from the business, from the company, from all this kind of stuff.”…
The Times says that “Lucas has decided to devote the rest of his life to what cineastes in the 1970s used to call personal films. They’ll be small in scope, esoteric in subject and screened mostly in art houses. They’ll be like the experimental movies Lucas made in the 1960s, around the time he was at U.S.C. film school, when he recorded clouds moving over the desert and made a movie based on an E. E. Cummings poem.”

I certainly didn’t foresee this man retiring any time soon. Hell, I thought the only way to get the lightsaber out of his hand would be by death, like Obi-Wan. This may not be the first time he’s announced retirement but for some reason I think it may be a genuine one because it’s not absolute. He still wants to make smaller films and still has a TV project in the back burner so I think there’s some validity to his statement. Sure, he’s got another Indiana Jones movie to make with Steven Spielberg, but heck we all know not to hold our breath on that one.

Regardless, he’s had an amazing career and deserves to be able to ride off into the sunset anyway he sees fit. I’m looking forward to watching this Red Tails movie and hope he continues to do well in his future endeavors. Thank you Mr. Lucas for all that you’ve brought to the film industry and I can’t wait to see what you come up with next.